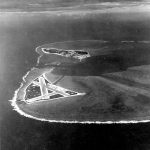 It’s a tiny island in the middle of the vast Pacific Ocean, so what possible impact could a battle for control of Midway Island have had? The answer is…much more than you might think. Sometimes, it’s not about the size of the nation, but rather about the might of its army. Japan is a little nation, it had built a mighty army and it was systematically defeating the Allies. Although other battles would soon make Midway seem like a small battle, no naval battle of World War II…and few others, if any, in all of naval history…would have so many momentous consequences ascribed to it as this one battle. So complete was Japan’s defeat at Midway, and so stunned was the Imperial High Command, that it would keep the results of the battle a secret from the Japanese people for the rest of the World War II. 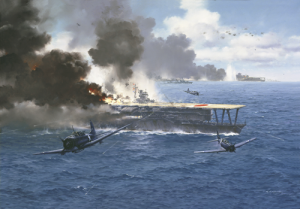 have removed the mystery of how such a “miracle” victory came to be and in other ways they have chalked it up to chance, luck, and the weather. The Americans had heard something about an attack, but the Japanese used the code location as “AF” to keep the attack location secret. The Americans suspected that it was Midway, so they sent a radio message that the island’s desalinization plant had broken down. The radio message was broadcast without encryption to ensure that Japan could read it if it was intercepted. The radio message was duly intercepted by Japan and reported by a message encoded in JN25 stating that AF’s desalinization plant was out of order and was intercepted by Station HYPO. “AF” was thus confirmed as Midway.

That was the beginning of the end for Japan. The Americans began to prepare for the attack. American scholars of Midway have long tried to explain away the many coincidences by characterizing the result of the battle as little short of a “miracle.” Walter Lord would name his 1967 narrative of Midway Incredible Victory, and 15 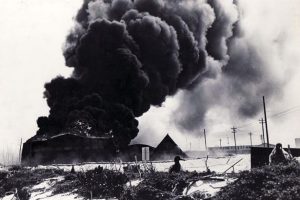 years later Gordon Prange’s posthumously published account of the battle was straightforwardly entitled Miracle at Midway. One battle participant’s memoir stated, “God was at Midway.” He saw divine intervention at work. The concept of the miracle has helped to explain the elements of the battle that have eluded detection, explication, or understanding. Some say that over the years, Midway has become less of a miracle, but that many mysteries remain. I say, that it was a miracle. God was at work at Midway. Even the weather worked against the Japanese when cloud cover prevented them from seeing what was right in front of them, and at the end of their attack…less than a week later, four Japanese fleet carriers would be twisted ruins on the bottom of the Pacific.