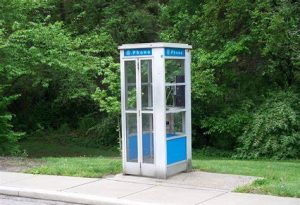 The current generation of kids probably have no idea what a phone booth is, besides maybe a place for Superman to change into his costume. From the time phones first became something that was provided to the public for a fee, phone booths became a common sight on city streets. Then in the 1950s, a new fad began. Much like the fad of stuffing as many people as possible into a car, people decided to stuff as many people as possible into a phone booth. My guess is that like most of these strange fads, this one too, 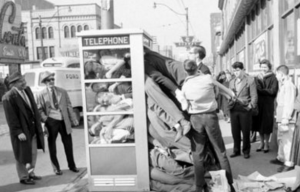 was practiced mostly by young people.

Phone booth stuffing first gained popularity outside the United States, but once it arrived stateside, in spring 1959, kids couldn’t help but join in. Basically, people would cram their bodies into the narrow spaces like sardines in a can. Some adopted other methods, such as stacking themselves horizontally. Just imagine being the guy on the bottom of the stack. All I can say is, “Hurry up, because I can’t breathe!!” 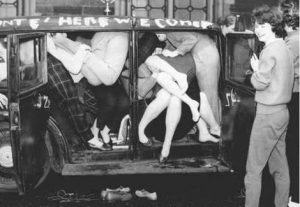 As with so many other crazy fad, phone booth stuffing became something to set a world record for. People began trying to outdo the prior record. The word record for phone-booth stuffing came in March 1959, when 25 people in South Africa piled into a booth. I can’t imagine how they could possibly fit 25 people in a phone booth, but while they were all in there, the phone rang. Of course, nobody answered the phone, because nobody could move enough to reach it. Sadly, the trend died by the end of 1959. Of course, that doesn’t mean that some of the other stuffing trends didn’t continue. I think people are still stuffing as many people as they can into a car. I just hope they don’t try to drive that way.