The Vodka Ran Out 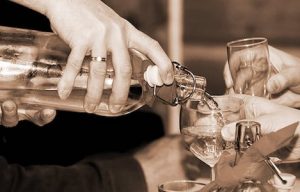 Our enemies really depend on the war we are in. In World War II, Russia was on the side of the United States. While they might not have really been our ally, they weren’t really our enemy either, so I guess they were our “frienemy.” In reality, they were in just as much danger as any other member of the Allies. Germany had made a deal with them, but then invaded them anyway. World War II was a fear-filled time. It was a hard-fought war, against terrible enemies. There were times that it looked like Hitler would win, but in the end, he did not, and as far as history knows, he committed suicide, along with his wife, Eve Braun Hitler, who married him the day before. 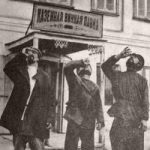 The people of the Soviet Union heard on the radio on May 9, 1945, at 1:10am, that Nazi Germany had signed the act of unconditional surrender. That surrender ended the USSR’s fight on the Eastern Front of World War II, or the Great Patriotic War as the Soviets called it. That war had been devastating consequences…according to official data, the state lost more than 26 million people. It was a great day for Russia and for the world. Hitler was dead, and the world could move forward and begin to heal. It was truly a rare case of an indestructible victory over its worst enemy, and the people of the state began a traditional method of celebration…drinking vodka and toasting to their victory.

The party began that day, May 9, 1945, and continued without ceasing for about 22 hours. People were so excitedly celebrating that they really didn’t think about their condition. They went outside in their pajamas, 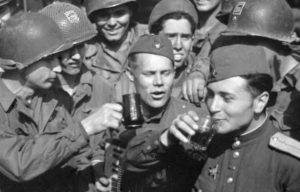 embraced, and wept with happiness. They didn’t care if they were in their pajamas, they were elated, and they partied. In fact, even non-drinkers began to drink. The party came to a screeching halt 22 hours later when the wartime deficiency of vodka, led to a unique situation. The party was in full swing, and when Joseph Stalin stepped up to address the nation in honor of the victory, the population had drunk all the vodka reserves in the country. I don’t think people really cared at that point what they toasted with. They would gladly lift a glass of water to cheer the victory. Nevertheless, how often does an entire nation run out of liquor…unless the nation is in prohibition, that is?