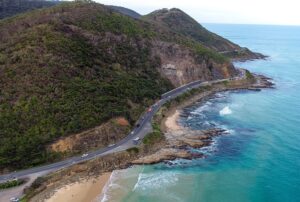 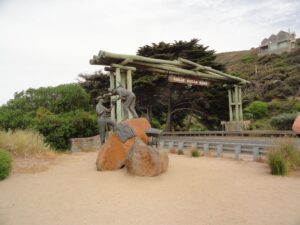 There are many trails or roads that stretch across this world that seem to be simply a way to get from point A to point B, and indeed, that is what many of them are, but there are some that hold a very different meaning. One such road is the Great Ocean Road in southern Australia. The Great Ocean Road is an Australian National Heritage listed 151 mile stretch of road along the south-eastern coast of Australia between the Victorian cities of Torquay and Allansford. The road was built by soldiers who had returned from war between 1919 and 1932 and dedicated to soldiers killed during World War I. The Great Ocean Road is the world’s largest war memorial. It is an interesting kind of memorial, winding through varying terrain along the coast and providing access to several prominent landmarks, including the Twelve Apostles limestone stack formations. The road is an important tourist attraction in the region.

There are a number of tourist attractions along the Great Ocean Road, besides the Shipwreck Coast west of Cape Otway, including the Surf Coast, between Torquay and Cape Otway, providing visibility of Bass Strait and the Southern Ocean. The road winds through rainforests, as well as beaches and cliffs made of limestone and 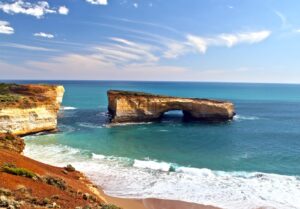 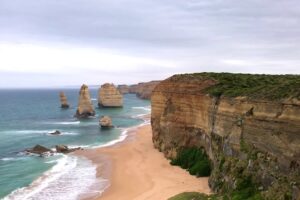 sandstone, which is susceptible to erosion…hence the limestone stacks. As the Great Ocean Road nears Geelong, the road moves along the coast, with tall, almost-vertical cliffs on the other side of it. Of course, there is the possibility of falling rocks, but it doesn’t deter the tourists. I have never had the pleasure of being a tourist along that beautiful stretch of road, but I really think I might enjoy it if I ever got the chance.