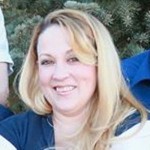 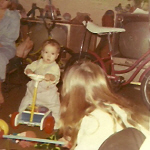 Time changes everything. Forty five years ago today, my sister, Cheryl Masterson became a mother, making my parents, Allen and Collene Spencer grandparents, and my sisters and me, aunts. It was such an exciting event for all of us, and it changed our lives forever. Never again would Cheryl be just a woman, she would be a mother from that day forward, as our parents would always be grandparents, and my sisters and I would always be aunts. At that time, the thought of that little baby growing up never crossed our minds, but my niece, Chantel Masterson Balcerzak had other ideas in mind…but then don’t all children. If they would just listen to us…they would stay babies forever

Not only was Chantel the first of the grandchildren for my parents, but she was quite little…not premature, just little. As with all grandparents, it seems like the cute little nicknames come out of the woodwork. Our family was no exception. What started out as little teeny baby, soon became Teensy, Little Teense, Chantsy, Chant, and even Chan. It’s a good thing that somebody, somewhere called her by her name, because otherwise, she might have thought her name was Teensy. And believe me when I say that Chantel grew into her nickname…or in her case, didn’t grow so she could fit her nickname. Chantel as an adult is all of four feet ten inches short. So, I can’t say that she grew up exactly, she simply became an adult, and I don’t think we were expecting that to happen so quickly. Nevertheless, before we knew it, Chantel was grown up, and my sister, Cheryl became a grandmother, our parents became great grandparents, and my sisters and I became great aunts. It seemed impossible that it could have happened so soon.

As we all know, time changes everything, and now, my niece Chantel has become a grandmother to Izabella Harman, Cheryl is the great grandmother, and my sisters and I are 2nd great aunts. Where have the years gone? And they aren’t slowing down either. Little Izabella is already more than 3 months old. Of course, she isn’t always called Izabella, because her grandma, Chantel likes to call her Belle or Bella. And she sings all the 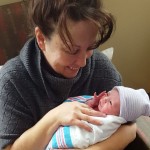 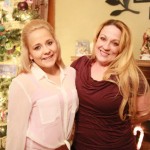 cute little songs to her…adding her name to it. Chantel loves being Belle’s grandma, and Belle loves her too. Of course, Chantel’s own nicknames haven’t gone away. Sometimes, I can still hear my dad calling her Teensy. Now that I think about it, I’m sure that he would calling her Grandma Teensy instead, because after all, time has changed that too, and now she can’t simply be Teensy…not when she is grandma to Belle. My dad would have loved that and he would have loved calling her Grandma Teensy too. Today is Chantel’s birthday. Happy birthday Chantel!! Have a great day!! We love you!!