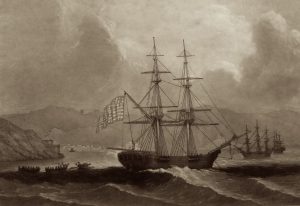 In 1799, in an area of the Caribbean Sea that had been listed as off limits for American ships, the English cutter, Sparrow intercepted the American brig, Nancy. The Nancy was in a place they should not have been, but the captain, Thomas Briggs produced papers claiming the ship was owned by a Dutchman. The captain of the Sparrow was skeptical, suspecting a smuggler. The problem was that he lacked evidence as to the true status of the Nancy, or the real reason for her trip. Due to his doubts about status and a lack of trust of the Nancy’s captain, the Sparrow’s captain sent Briggs to Jamaica to have his case heard by the vice-admiralty.

It turns out the captain of the Sparrow was not wrong in his doubts. Two days later, another English ship, the Ferret, caught a large shark near the coast of Haiti. When the cut the fish open, they found in its belly the papers of the American ship Nancy. Apparently, the Nancy’s captain, Thomas Briggs had thrown them overboard before getting false Dutch papers in Curacao. It was simply a fluke that the 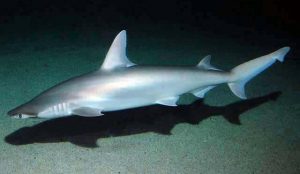 Ferret somehow managed to catch the very shark that ate the real papers. I suppose that if the Nancy’s captain had used any common sense at all, he would have burned the papers, and then thrown the ashes overboard. The likelihood of having any useable paperwork after they were burned, would be extremely slim. The valid papers for the Nancy were dubbed the “shark papers.” They were produced in court, and the Nancy and her cargo were confiscated.

The Nancy truly was an American sailing vessel, even though the captain tried to hide that fact. It was a type of ship noted in sources as either a brig or a brigantine, and it had been chartered to transport war supplies during the American Revolutionary War. When Michael Fitton, captain of the schooner Ferret, tender to HMS Abergavenny, cruised the Mona Passage in company with Sparrow, commanded by Mr Whylie, the two accidentally separated for a few days. On rejoining, Fitton invited Whylie by signal to come to breakfast, and 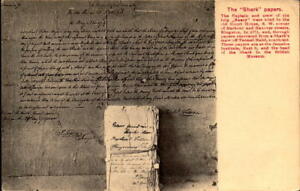 while waiting caught a large shark that was under the stern. In its stomach was a packet of papers relating to an American brig Nancy. When Whylie came on board, he mentioned that he had detained an American brig called Nancy. Fitton said that he had her papers. A shocked Whylie exclaimed, “Papers? Why, I sealed up her papers and sent them in with her.” “Just so, those were her false papers; here are her real ones,” replied Fitton. Proof positive. The fate of the Nancy and her captain were sealed. The shark’s jaws were set up on shore, with the inscription, “Lieutenant Fitton recommends these jaws for a collar for neutrals to swear through.” The papers are in the museum of the Royal United Service Institution.