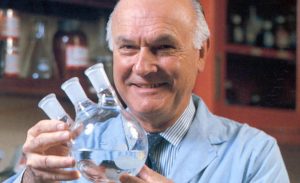 An inventor might set out to solve a problem or make a job easier, but halfway through the process…somehow, the invention turns into something completely different. And some inventions maybe started out simply experimenting with different chemicals and suddenly, you have something amazing.

Eastman Kodak researcher, Harry Coover was trying to create plastic gunsights. Coover first came across cyanoacrylates (the chemical name for these überadhesives) in World War II. The problem was that the cyanoacrylates kept sticking to everything. The substance they came up with was very sticky. In fact, it was so sticky that it just wouldn’t work.

Its stickiness infuriated Coover. The substance was “shelved” for years, because while it was an interesting substance, they couldn’t figure out what to use it for.

Coover dismissed the chemical and tried different approaches. He came across the material again in 1951. This time, Kodak experimented with cyanoacrylates for heat-resistant jet airplane canopies. Again, the stickiness got in the way. It wouldn’t work for the project at hand, but then Coover had an epiphany. “Coover realized these sticky adhesives had unique properties in that they required no heat or pressure to bond,” writes the Massachusetts Institute of Technology (MIT) in a column from 2004. “He and his team tried the substance on various items in the lab and each time, the items became permanently bonded together. Coover – and his employer – knew they were on to something.” This stuff was an amazing adhesive.

While Coover’s original patent called the new invention “Superglue,” Kodak sold the adhesive under the less-evocative name “Eastman 910.” Have you ever heard of Eastman 910? No…I haven’t either. Sometimes the

success of an invention is partly or even largely in the name. Eastman 910 was a very good adhesive, but with a lackluster name. “Later it became known as Super Glue, and Coover became somewhat of a celebrity, appearing on television in the show ‘I’ve Got a Secret,’ where he lifted the host, Garry Moore, off the ground using a single drop of the substance,” writes MIT. I doubt there are many people these days who haven’t heard of Superglue. We have all used it, because it is one of the best glues out there. As the years go by, I’m sure inventors will come up with better glues, but I don’t know if any of them will be as easy to use as Superglue is.