In the early years of politics in the United States, the political parties had different names than they do these days. Of course, with the additional parties we have now, it is an ever changing political scene, with the lesser parties visible, but unlikely to win the office of President of the United States…at least for now. The First Party System of the United States featured the Federalist Party and the Democratic-Republican Party (also called “Democratic-Republican” or “Jeffersonian Republican”), these were in place from 1792 to 1824. The Whig Party, led by Henry Clay, that grew from the National Republican Party, and the Democratic Party, led by Andrew Jackson, were in play from 1828 to 1854. The Third Party System stretched from 1854 to the mid-1890s, and was characterized by the emergence of the anti-slavery Republican Party (nicknamed “GOP”), which adopted many of the economic policies of the Whigs, such as national banks, railroads, high tariffs, homesteads and aid to land grant colleges. It was into this time-frame that President Abraham Lincoln entered office.

Abraham Lincoln was elected the 16th president of the United States over a deeply divided Democratic Party, becoming the first Republican to win the presidency. Lincoln received only 40 percent of the popular vote but handily defeated the three other candidates…Southern Democrat John Breckinridge, Constitutional Union candidate John Bell, and Northern Democrat Stephen Douglas, a United States senator from Illinois. Lincoln, a Kentucky-born lawyer and former Whig representative to Congress, first gained national stature during his 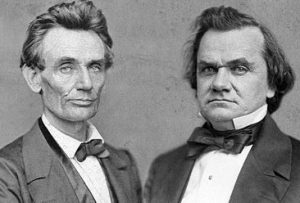 campaign against Stephen Douglas of Illinois for a United States Senate seat in 1858. The senatorial campaign featured a remarkable series of public encounters on the slavery issue, known as the Lincoln-Douglas debates, in which Lincoln argued against the spread of slavery, while Douglas maintained that each territory should have the right to decide whether it would become free or slave. Lincoln lost the Senate race, but his campaign brought national attention to the young Republican Party. In 1860, Lincoln won the party’s presidential nomination.

I find it very odd that today’s Democrats try to take credit for racial equality, when history proves that the opposite was true. When we look at the wars and the votes by the party numbers, it is easy to see that the Democratic party has long been the one trying to keep racial injustice going in this country. In fact, it was Lincoln’s anti-slavery views that caused the secession of seven southern states in protest, because they wanted to keep their slaves. Now, many people are wanting to tear down the statues that were erected to the heroes of the south…all Democrats, and it is the Democratic Party that is leading the fight. In my opinion, it is like tearing yourself apart from the inside. The Democratic Party, in an effort to appear to be the ones trying to obtain equal rights for all races, is, on the outside anyway trying to appear to agree, while on the inside, they are just trying to take eyes off of their own underhanded agenda. I don’t know how I feel about the removal of those statues, but I don’t like that the Republicans and Conservatives are being blamed for the initial placement of the statues. 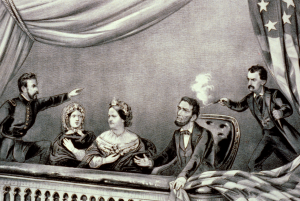 In 1863, as the tide turned against the Confederacy, Lincoln emancipated the slaves and in 1864 won reelection. In April 1865, he was assassinated by Confederate sympathizer John Wilkes Booth at Ford’s Theatre in Washington DC. The attack came only five days after the American Civil War effectively ended with the surrender of Confederate General Robert E. Lee at Appomattox. For preserving the Union and bringing an end to slavery, and for his unique character and powerful oratory, Lincoln is hailed as one of the greatest American presidents. And amazingly…at least to the Democrats, he was a Republican.