The Home Of His Dreams 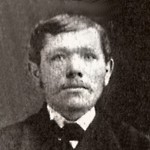 On this, the 130th anniversary of the arrival of my great grandfather, Carl Ludwig Theodor Schumacher in the United States, I have been thinking about how it must have felt for him. He had made the most difficult decision to leave his homeland at the very young age of 25, and board the SS Gellert, leaving from Hamburg, Germany on April 6, 1884 to start a new life, far away from his parents and family in the United States of America. He had been reading letters from his uncle and cousins about how wonderful America was, and in particular, how wonderful Minnesota was, since he was 18, and he had made up his mind to go. He would work seven long years taking care of the horses of a wealthy landowner to earn the $50.00 needed to pay his fare. He knew that travel by ship across the Atlantic could be dangerous, and he might be very homesick for his family, but he was determined to go. He knew, also that it would take years of hard work to build the American Dream that he had in mind for his life. My great grandfather would be successful in building his American Dream, but today my thoughts go not to thinking of his dreams, but rather to how he must have felt as he made such a life change.

A young man of 25 years is really not so grown up that a move half a world away doesn’t feel scary. That kind of a move would be a daunting experience for anyone, no matter how

old they are. And then to arrive at a place like Ellis Island, or in my grandfather’s case, Castle Garden, since the Ellis Island facility wasn’t built until 1892…not really knowing what you would be put through before you would be allowed to enter the United States. Many people were required to Americanize their names, so it would be easier for them to fit in…forever altering their identity. That was the case for my great grandfather, when his name was changed from Schuhmacher to Schumacher. Still, the immigrants felt like this was a small sacrifice to make for the gain of the American Dream, and in fact, many immigrants felt like that name change was like a rite of passage into this great country.

Nevertheless, I can’t help but feel that my grandfather must have felt some level of sadness at the change of his name, even though he would use it again when he was married. Still, the census records, and other records show it as Schumacher, thus muddying the waters when it comes to genealogy records. I don’t suppose that was the 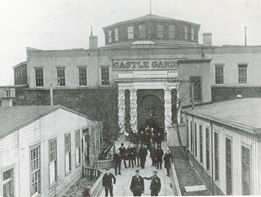 thing my great grandfather was thinking about as he waited for his turn at Castle Garden on April 21, 1884, but as my mind looks back in time to that day that would end up being so very important to my life, it is something that definitely occurs to me. My great grandfather had been through so much to come to this new land filled with opportunity, and I’m quite certain that the overwhelming changes must have made him quite weary, but as he arrived in Minnesota and began the work of building that dream, I suppose that all of the uncertainty of the journey to get where he was, became simply a distant memory. He was home…the home of his dreams.