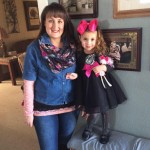 There are some people, who bring a mixture of sparkle and strength to the table of life. My niece, Jenny Masterson Spethman is one of those people. Life has not dealt Jenny a perfect hand, but she has persevered anyway, and has come through every trial a stronger, more caring, loving, and faith-filled woman than she was before. Jenny is the kind of person who puts her trust in God in every situation, and doesn’t look to her own understanding in any matter. That makes for a strong woman no matter what life hands her. While Jenny’s life has not been without sadness…the kind that never leaves you, she has still managed to study to show herself approved of God, and to strengthen her faith. She will never understand all that has happened in this life…at least not until the next life, but she trusts God to continue to bless her and her family, and He certainly has. Jenny has also been a blessing to those around her, as anyone who has had a need can tell you. Jenny is someone you can always come to for help, no matter what the situation. 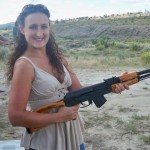 Jenny has a sense of style that is all her own. She knows the styles she likes, and she doesn’t really care if they are completely in style or not. Nevertheless, her style always works, therefore, making it in style. Jenny loves to dress her little daughter, Aleesia in adorable outfits and then takes lots of pictures of the two of them to show those who know them. You see, Jenny waited a very long time for her daughter. After three sons, Jenny and her husband Steve had a baby girl, named Laila, but she passed away just 18 days later. It was a devastating blow, but they chose to look to God and trust in Him, no matter what. Now, they have been blessed with a second daughter…a Rainbow Baby, who can never replace her sister, of course, but brings much joy to their world. 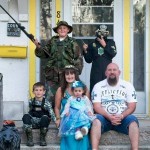 You might think of Jenny as a wimpy little girly girl, and while she is a girly girl, you would, nevertheless, be very wrong about her. Jenny is an excellent marksman. She and Steve have been gun owners and have been shooting for years. They have taught each of their boys how to shoot, and two of them, Xander and Zack have already passed the Hunter Safety class. Isaac isn’t too far behind them I’m sure, and in time, Aleesia will also pass the course. Those children have the benefit of a great firearms education, and could protect the family easily, if required to, as could their parents. People might think it a difficult thing to mix sparkle and strength, but Jenny really has no problem doing just that. Today is Jenny’s birthday. Happy birthday Jenny!! Have a great day!! We love you!!