One of the first American battleships, the USS Maine weighed more than 6,000 tons and was built at a cost of more than $2 million. That was a lot of money back in 1884, when the USS Maine, several other new battleships, and other warships built by the United States Navy to modernize the fleet. The Maine was launched on November 18, 1889, and commissioned on September 17, 1895.

The ship was sent to Cuba on a friendly visit to protect the interests of Americans there after a rebellion against Spanish rule broke out in Havana in January, 1898. On February 15, 1898, while sitting in Cuba’s Havana harbor, the ship suddenly exploded, killing 260 of the fewer than 400 American crewmen onboard. The massive explosion of unknown origin, was the subject of an official U.S. Naval 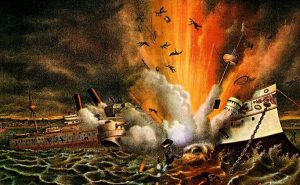 Court of Inquiry, which ruled in March that the ship was blown up by a mine, without directly placing the blame on Spain. The majority of Congressmen and of the American public felt that there was little doubt that Spain was responsible and they called for a declaration of war.

Diplomatic failures to resolve the USS Maine explosion, in addition to the indignation the United States felt over Spain’s brutal suppression of the Cuban rebellion and continued losses to American investment, led to the outbreak of the Spanish-American War in April 1898. The destruction of USS Maine and the loss of life that accompanied it, played a large part in the beginning of that war. As we have seen in history both before and after this incident, waking the sleeping giant that is the United States is never a good idea. We may be slow to enter a war, but when we get into one, we go into it full bore. When this giant goes to war, we go to win. 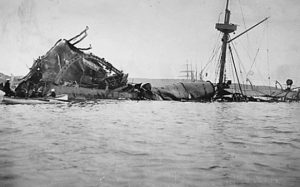 It took the United States only three months to decisively defeat the Spanish forces on land and sea. In August an armistice halted the fighting. On December 12, 1898, the Treaty of Paris was signed between the United States and Spain, officially ending the Spanish-American War and granting the United States its first overseas empire with the ceding of such former Spanish possessions as Puerto Rico, Guam, and the Philippines. In 1976, a team of American naval investigators concluded that the Maine explosion was likely caused by a fire that ignited its ammunition stocks, not by a Spanish mine or act of sabotage. I guess we will never know for sure.