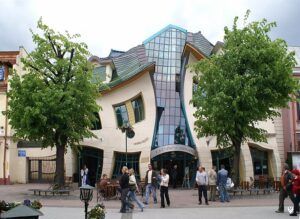 Krzywy Domek in Polish for “crooked house” and while the description is correct, it maybe should mean “a house to feel drunk in.” Krzywy Domek an unusually shaped building in Sopot, Poland, and when I say unusually shaped, I’m not kidding. This building looks like it melted or something. It could almost look like a house in a drug-induced stupor, but in reality it is considered a really fun place to go. It looks like a picture taken from a child’s fictional book. It is about 43,000 square feet in size and is part of the Rezydent shopping center. The building was designed by Szotynscy and Zaleski, who were inspired by the fairytale illustrations and drawings of Jan Marcin Szancer and Per Dahlberg. Krzywy Domek can be entered from either Monte Cassino or Morska Streets. Krzywy Domek was built in 2004. Since it was built, Krzywy Domek has had visitors all over the world. They have all come to have a look at this architectural wonder designed by the Polish architects. Szotynscy and Zaleski were said to be charmed by fairy tales’ illustrations. 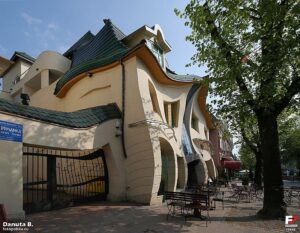 The strange design has many experts puzzled as to why, even given the architects interest in fairy tales. With its surreal details, this strange edifice is a puzzle to experts. It is said that this 43,000 square foot creation can be put up only by an artist, but maybe there is another reason for this strange creation. The Village of Joy portal published the list of the 50 strangest buildings of the world. The Krzywy Domek was awarded first place due to its unique, unusual, full of magic architecture inspired by the drawings of Jan Szancer. The Krzywy Domek defeated such world-wide buildings as the Torre Galatea Figueres in Spain, the public library in Kansas City in the USA, and the famous Guggenheim museum in Bilbao.

The building really is crooked, as its name suggests. It is full of strange and magical details: blue-enameled shingles on the roofs, colorful stained glass doors and windows, and stone elevation decors which seem an illusion to the eyes. It is also worth looking at night with its even more exclusive and captivating form. While 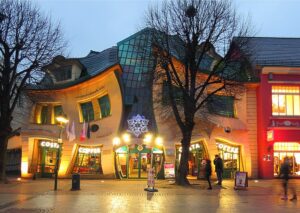 some people call it the “mind-melting” crooked house, others suggest that it looks like it went through warping software. It has also been known to almost induce vertigo. The strange building is home to a radio station, shopping centers, and centers for relaxation purposes. Strangely, the interior is really not crooked-looking, except for the stairs which are a bit slanted. The Crooked House or Krzywy Domek is also home to the “Wall of Fame” on which participants of Poland’s cultural events add their name…an idea that thrills its visitors. It’s a bit of a spin off of the Hollywood Walk of Fame. Personally, I think their “Wall of Fame” might be more interesting, although, it could be because of the Crooked House itself.