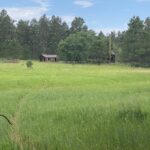 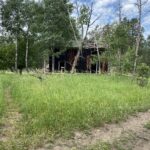 A couple of days ago, my husband, Bob Schulenberg and I went for a hike through a South Dakota ghost town called Spokane. It was founded in 1890 to extract precious gold, the mine proved richer in silver, copper, zinc, mica and graphite. The town hit its stride in 1927 with its biggest year ever totaling $144,742 in profits which helped fund the school building whose bones can still be seen, at least for now. The tow is rapidly deteriorating, so they won’t be around much longer. By 1940, the mine and town were all but abandoned. The town limped along, with the manager’s house being the last one to be abandoned in the 1970s. The Spokane Mine was discovered in 1889 by Sylvester Judd more or less by accident. As the story goes, “he had placed a rock (likely galena or cerussite) from the outcrop on his wooden stove. He was amazed when he found molten lead coming from the mineral.” The town was formed the same year the mine began operations, in 1890, but it was not the town or it’s dilapidated buildings, but rather the tragic history of the place that caught my attention.

A man named James Shepard, or Jim as he was know to family and friends in Spokane, heard about the gold rush in the Black Hills and decided to take his family from North Carolina, to the town of Spokane to stake his claim. A local man named Frank Cox had not kept up assessment work on the Spokane Mine, which he himself had “jumped” when it had been neglected by someone else. It isn’t the best way to stake a claim, but it is legal apparently. Jim had enough to stake his claim to the mine, so he claimed it and on June 21, 1908, when he drove his stake at the site. Jim was well liked and since he did things right, people respected him and his family.

Frank Cox’s wife, the Sunday school teacher, observed the staking of the claim by Shepard while riding to the schoolhouse and informed her husband. Then the real trouble began. That evening, Jim rode his horse to bring his free-roaming milk cow back to the house. According to his account, when he had his guard down, Frank and his son Henry stepped out from behind some trees. Frank yelled, “You son-of-a-bitch, you have driven your last stake!” and shot Jim with a shotgun. He was able to ride home, where his wife, Jessie, frantically helped him into bed and rode for help.

Jessie went to the Hoffman home and told them that Jim had been shot. Edgar H. Hoffman, who was 12 years old, never forgot that night. “Mrs. Shepard was a tall, dark mountain woman. Her clothes and the saddle were soaked and spotted with blood,” he said. A neighbor rode to the nearest doctor, but that was 17 miles away in Custer. It was an awful stormy night with heavy rain and lightning flashes. Not an easy way to make such an important trip. The next morning, the doctor and sheriff arrived to just in time to hear hear Jim’s dying words…words that incriminated Frank and Henry. The town was horribly shaken by the murder. The crowd could only be described as “angry and hostile” at Jim’s funeral.

“In order to prevent violence, the minister had the congregation point the finger of guilt at whoever they felt had committed the murder. Everyone pointed the finger at the Cox house. From then on, the Coxes were ostracized by the Spokane community and they sent their son away to relatives,” wrote Inez Shepard Shafer, Jim Shepard’s only surviving child.

In the July 10, 1909 edition of the Keystone Record, it was stated that the trial was “one of the longest and hardest fought preliminary hearings ever held in Custer County. It was thought at first by friends of Cox that he would have no trouble in proving an alibi, as he was at the Ideal [mine] all day Sunday and slept there that night. This is true, but there was about an hour and a half in the evening he was unable to account for, and about the time the shooting was supposed to have taken place. It is unfortunate for all concerned, and if Cox proves his innocence, and many believe he will, the chances are we will never know who killed James Shepard.” 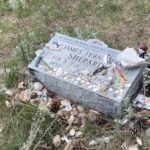 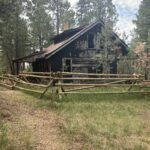