In Search Of Amazing 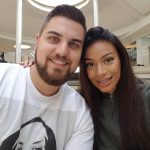 My niece, Gabby Beach, who married my nephew Allen on September 24, 2014, is just wrapping up her service in the Navy. In fact, that is where they met…stationed in Yokosuka, Japan. Theirs was an unusual courtship in that it all happened abroad. The proposal was unusual too, in that it took place in Bali. The whole trip was rather exotic, including riding an elephant. Definitely not your run of the mill proposal.

After their time in Japan was over, Gabby and Allen were stationed n Washington DC, where she worked in a dental office, but she also worked with service dogs as a volunteer. Now that is far more interesting than dental work, and if you had a chance 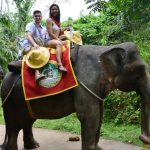 to talk to Gabby about that work, as I did, you would know that just the mention of her beloved dogs, makes her beautiful eyes just light up. It didn’t take much imagination to know that those dogs were like children to Gabby, and she totally loves them. It wouldn’t surprise me to hear that she continued to volunteer in the training of service dogs after her time in the service is over, or even if she chose that or something similar as a career for life. To hear her tell about the dogs and what they do, which is to go into hospitals and simply visit the patients. That sounds like such a small thing, but since I have seen such dogs in action in the nursing home where my mother-in-law lives, I can tall you that those dogs are invaluable to the residents there. They have such a wonderful way with them, and they bring joy to each patient they “visit,” because that is what they do, make rounds or visit the patients. It is the sweetest thing I’ve ever seen, and to think that Gabby has helped train them, is really cool. It has to be an amazing feeling. 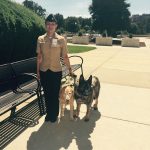 Upon leaving the Navy, Gabby will begin college. I’m not sure what she plans to study, or if they will continue in Washington DC or transfer somewhere else. I know that Texas has been mentioned, but time will tell where they decide to land. For now, a road trip in June to Oregon to watch her younger brother graduate from high school is the first order of business. I also know that the summer months will find Gabby and Allen doing the pastime the love the most…fitness of lots of kinds, but for Gabby, the top activity on her list is rock climbing. No wonder she looks so good. She’s always out there, in search of amazing. Today is Gabby’s birthday. Happy birthday Gabby!! Have a great day!! We love you!!