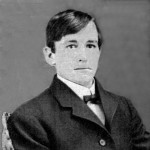 How could a simple trip become such an awful nightmare? Walter Alden Davis was just going on a short trip with his friend, Fred Willar to celebrate Independence Day in 1906. It was going to be a great day, and it was a great day, until the day ended. Walter and Fred rode their horses to Hay Springs, Nebraska from their homes in Rushville, Nebraska. The distance was about 12 miles. Then they took the train into Chadron, Nebraska for the festivities and to visit some friends.

Walter had seen a coyote earlier in the day, so he borrowed a revolver from a friend in case he saw another one. After a great day with friends and the Independence Day festivities, Walter and Fred took the midnight train back to Hay Springs, where they got a room at the hotel. Unfortunately, Walter had forgotten about the revolver, which was in his pocket, and when he dropped his pants on the floor, the revolver fired. The bullet went up through Walter’s hip and into his abdomen. He died a few hours later, on July 5, 1906. He was only 21 years old. The accident happened just 11 days before his 22nd birthday.

When I think of how Great Aunt Tessie and Great Uncle William must have felt when they heard the news, it makes me want to cry. They had already lost a son, Edward Allen Davis in 1893, at just 3 months of age, and a set of twins, a boy and a girl, in 1898, who died at birth, and now this. We often wonder just how much tragedy we can take, and in the 1800’s and early 1900’s, medicine was just not as good. Doctors could only do so much for poor Walter. Maybe if this had happened in this day and age, he might have been saved, but maybe not too. There is just no way to say with any certainty.

I’m sure the family wondered how they could go on without this handsome son who had been such a big help on the ranch. Nevertheless, the Davis family were a strong bunch, and they would not only survive this loss, but the loss of two more children. One before William passed away in 1925, and another the year after his death. I have to think that Great Aunt Tessie was a one of the true pioneer women of the west, because those women had to be strong enough to live through disaster and tragedy, and still come out of it unbroken. While nothing would replace their handsome boy, they would move forward, and they would survive.