While traveling in California, I noticed one particular tree. Now, I know that is odd considering the vast number and distinct types of trees in California. We were on our way to the Redwoods, but this was a little fir tree of some type. I’m sure many people would have considered it insignificant, and even weird, but it got me thinking. The tree was full and well shaped, but sticking out all over it were dead branches, from some event that happened to it. But this little tree had persevered and was coming back. The dead branches were simply battle scars from its fight for survival.

The reason this particular tree got me thinking is that it reminded me of many people around us. People who have been down a tough road, and with the scars to prove it, but through hard work and perseverance, they are still alive…still moving on…still living life. They are coming back from their battle, and working on being, at least to a degree, the person they were before.

So often we look at people who have bee through it, and decide that they have let themselves go, when in reality, maybe they have been through it, but they haven’t let themselves go, rather they are fighting their way back. Every person is beautiful in their own way, just like that little tree. Sure, there are some rough edges, and a few battle scars, but the tree was lush and green around all those dead branches, quite unique. I didn’t take a picture of that tree, and have regretted that, because I looked and looked for another, and found none. It was unique, and it was alone in its look, and that was why it was so special. 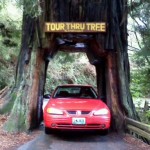 Today we went through more of the Redwoods, including the Tour Thru Tree, and the Newton Drury Scenic Parkway where we saw The Big Tree, which for that area was bigger than the rest…and those were all giants. It was gorgeous!! You just can’t comprehend the beauty of the rain forest and the Redwoods until you have experienced them for yourself. We took lots of pictures and walked the trails in the area, and as we went, I was struck with awe at just how small I was. I realize that I am in no way as tall as any tree, but next to these, I felt the size of a mouse or something. It is truly amazing that they can get so big.

These trees were amazing in several ways. We were surprised at the fact that when a tree fell, often another tree would just begin growing right over the fallen tree. Before long, the living tree and the dead tree were one. Another thing we saw was a tree that attaches itself to another tree, and 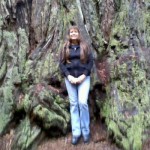 after the lower section of the tree broke off, the upper part just kept right on growing due to the fact that it attached itself to another tree. It’s like the whole forest is connected and it just continues to use what is available. The clover grows on the dead logs, the moss attaches itself to the trees. Everything is used, nothing goes to waste. It all supports everything for the common good of all life there. How very unusual that is.

As we head home today, it is with some regret, that we didn’t have a little more time, and yet I am thankful that we got to come at all. We had not planned on the California coast or Oregon, but we were able to do both, and found both to be incredibly beautiful. We live in a beautiful country, and I feel very blessed to have seen as much of it as I have. 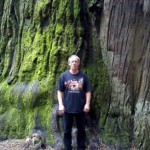 Today Bob and I visited the Redwoods in northern California. It was a beautiful drive that we will continue tomorrow, when we drive through a Redwood tree. Our trip was altered somewhat by a mudslide on Highway 101, that shut down the part of the area where some of the most famous trees are, but after some scrambling, we have found an alternate tree to use for our picture, so that will be posted tomorrow on Facebook.

Today we drove through some beautiful areas, and found some awesome trees, as you can see. The Redwoods are truly amazing, as was the northern coast of California, which neither of us had visited before. It is quite different from the southern coast, but we did find a great beach to walk out to and find drift wood. I especially liked all the rocks out in the ocean along the coast. It makes me wonder how they came to be there, but I don’t suppose I will ever know.

Touring the Redwoods today, reminded me of a story I was told concerning Bob’s brother Ron, who was 4 or 5 at the time of this story. Bob was in high school and had a job, so he was unable to go on vacation with the family when the went to California and the Redwoods. Nevertheless, they had a great time and young Ron decided that he wanted to stay. In an effort to convince Ron that they couldn’t stay, they said that staying would be impossible because Bob was at home and would miss them. Ron, who was quite quick in my opinion, had the perfect solution…send for him in the mail!!! Well Ron, I just wanted to let you know that the mail finally delivered Bob to the Redwoods…soooo, where are you?