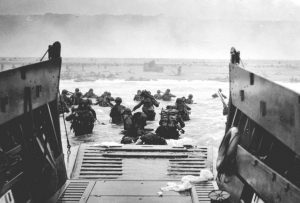 Most people from the Baby Boomer Generation know the significance of D-Day, but it occurs to me that many people in the younger generations may not really know what it was all about. Operation Overlord was the Allied invasion of northern France, commonly known as D-Day. The operation was under the direction of Supreme Allied Commander General Dwight D. Eisenhower. The operation had a brief 3 day window in which to take place, and June 5th had been chosen to be the day, but the day dawned gloomy, so the operation had to be scrubbed for the day.

Then on June 6th, the orders came down that Operation Overlord was a go. By daybreak, 18,000 British and American parachutists were already on the ground. An additional 13,000 aircraft were mobilized to provide air cover and support for the invasion, among them the B-17, Raggedy Ann, which was carrying my dad, Allen Spencer, who was a Top Turret Gunner and Flight Engineer. At 6:30 am, American troops came ashore at Utah and Omaha beaches. The British and Canadians overcame light opposition to capture Gold, Juno and Sword beaches, as did the Americans at Utah. Omaha beach was a much different situation, however, where the US First Division battled high seas, mist, mines, burning vehicles, and German coastal batteries, including an elite infantry division, which spewed heavy fire. Many wounded Americans ultimately drowned in the high tide. British divisions, which landed at Gold, Juno, and Sword beaches, and Canadian troops also met with heavy German fire. 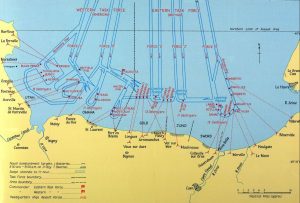 The troops persevered, even though the loses were great, and in the end the operation was declared a victory. There were many reasons that D-Day was successful, even against all odds. The Allies had fooled the Germans, who thought the attack was going to occur farther along the coast at Calais because this was the shortest route by sea, even when the attack began on the beaches Hitler was still convinced the attack was going to occur at Calais. What a shock that must have been when he found out that the attack took place on the beaches of Normandy. False intelligence spread by the allies spread false information to the Germans, and they bought it.

There were many factors that all worked together to make the plan work. Wooden guns on the South Coast of England, wooden planes, dropped plastic dummies out of planes, they put mirrors up on their ships and the Germans were fooled as they saw themselves going the other way. New technology specifically designed for the landing enabled the Allies to gain an advantage over the Germans. Mulberries, the floating docks the Allies used to land, enabled the Allies to land safely and disembark while firing. Some of the beaches were practically empty, however, on Omaha beach the Allies suffered heavy losses numbering 2000 in total. Operation Overlord had been planned for many years and so they were ready. The Germans had to keep control of the other parts of their empires, so their troops were elsewhere. Hitler denied that his forces were losing in Normandy, and 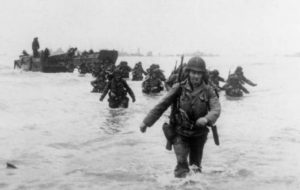 would not authorize the mobilization of forces stationed near Normandy.

As for the Allies, the troops involved were highly trained, equipped and motivated. Their battle plan was well prepared. All the necessary manpower and logistics were available to them. The air space was controlled by the Allies. The sea lanes were very short and the seas were in Allied hands. The deception plan was flawless. The Germans had no idea what was coming. The French Resistance was highly effective. The German troop who were there were poorly motivated. Hitler’s Defense Planning was completely flawed. But, the biggest victory is that the troops did their job.