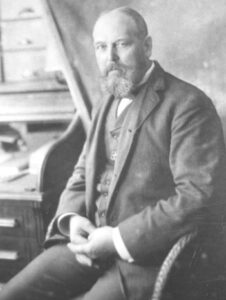 We don’t often think of the United States having castles, but some do exist. Most are not considered true castles, but are rather country houses, follies, or other types of buildings built to give the appearance of a castle. In architecture, a folly is a building constructed primarily for decoration, but suggesting through its appearance some other purpose, or of such extravagant appearance that it transcends the range of usual garden buildings. Castles seem like almost ancient history items to most of us, and when it came to the United States, many people thought of the Old West and homestead type dwellings. Nevertheless, there are a few real castles here in the United States, even if we don’t have royalty here.

One such castle is Bannerman Castle in New York. The castle is located on Pollepel Island, about 50 miles north of New York City, on the Hudson River. The castle is in serious disrepair, but the Bannerman Castle Trust, Inc is trying to shore up the buildings so they don’t deteriorate further. The analysis that has been done indicates that 5 out of the 7 buildings on the island could be shored up. The others are too far gone. The castle has a strange history, and I suppose some would debate it’s claim as a true castle. The castle was built by Frank Bannerman VI over a period of 17 years. The island’s buildings were personally designed by Bannerman without professional help from architects, engineers, or contractors. The island has buildings, docks, turrets, garden walls, and a moat in the style of old Scottish castles. That was his passion. He loved Scottish castles and built his castle with a Scottish flare. All of the buildings are elaborately decorated, from biblical quotations cast into all fireplace mantles, to a shield between the towers with a coat of arms, and a wreath of thistle leaves and flowers.

Bannerman’s family immigrated to America in 1854, when he was three. They settled in Brooklyn, New York, where his father established a business selling flags, rope, and other articles acquired at Navy auctions. He was a patriotic man, who joined the union army during the Civil War. At that time young Frank began running the business. He was 13 years old. When the Civil War ended, the US government auctioned off military goods by the ton, mostly to be scrapped for their metal. It was young Frank who saw the importance of these materials, and it was his wise purchases that earned him the moniker “Father of the Army-Navy Store.” He could see that much of what was being sold had a market value higher than scrap. Under the guidance of the younger Bannerman, the Bannerman family became the world’s largest buyer of surplus military equipment. By this time, their storeroom and showroom took up a full block at 501 Broadway. Bannerman made his store into a type of museum/store. It opened to the public in 1905. Of it, the New York Herald said, “No museum in the world exceeds it in the number of exhibits.”

Frank was very prosperous, and it was during a business trip to Ireland that he met his future wife, Helen Boyce. They had three children. At the close of the Spanish American War, Frank Bannerman purchased 90 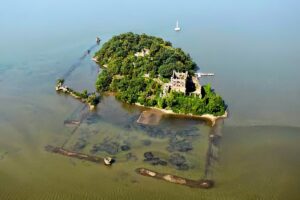 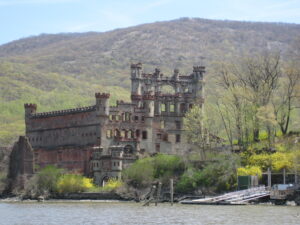 percent of all captured goods in a sealed bid. After that, it became necessary to find a secure place to store their large quantity of very volatile black powder. His son, David saw Pollepel Island, in the Hudson, and Frank Bannerman purchased it in 1900. Following the purchase, the building of the castle began. Today, the island is owned by the state of New York, and at this time visits are prohibited until the buildings can be made safer.