I Know Her Now

Often, when we ask about the events of someone’s life, it is amazing the seemingly little things about them, that were really big things, and yet, we did not know about them. My Aunt Bonnie is like that. There are a lot of things I knew about her, like her talent for cake decorating. She made my 25th anniversary cake, my girls wedding cakes, and so many cakes for other people. So many wedding receptions were made beautiful because of those cakes. They have endeared Aunt Bonnie to all of us for many years.

But it was not the cakes that I found out about recently, but something else…and I suppose it shouldn’t have surprised me, because of the way she was with the cakes…giving them as a wedding gift to the couple. It was that years ago, when Aunt Bonnie was 13 or 14 years old, she did some volunteer work. My mom wasn’t sure exactly what the work was, because she was married and living in Wisconsin, but she thought it had to do with making phone calls and service men. I’m sure that my story will bring to light the whole story, but Mom told me that it was important work, and Aunt Bonnie was very proud of the work she did. I never knew that she had anything to do with volunteering for the USO or the Army.

As I said, my story brought out the real story, and Aunt Sandy called me to fill in the missing details. I want to thank her for her assistance in getting to the whole story. Aunt Bonnie worked in the Airforce Filter Center. Her job was to keep track of where each company of men were to pass on to their relatives. I agree that her work was very important…especially to the families of the soldiers who were deployed. I am  very 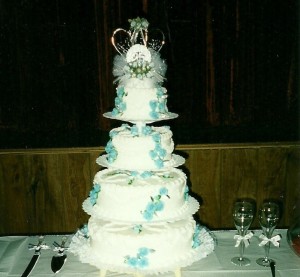 proud of my aunt’s service to our country, and to our soldiers.

Another thing I didn’t know, is that Aunt Bonnie did some acting in plays as a young lady. She was a part of a local theater group. Acting…a far cry from what I would have thought. It isn’t that I can’t see Aunt Bonnie acting, because she has so many talents, that it makes sense that acting was one of them. I would love to have seen some of the plays she was in. Who knew?? Maybe I can’t say I knew herthen, but I can say…I know her now!!

Today is Aunt Bonnie’s birthday. She is a very special lady, and bring much joy and beauty into the lives of all who know her. Happy birthday Aunt Bonnie!! Have a great day!! We love you!!