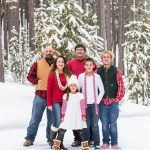 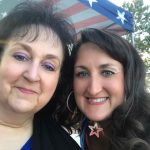 My niece, Jenny Spethman has gone through many changes in her lifetime…some of them are happy and a few are sad, but Jenny is one of those people who chooses to be happy no matter what her circumstance. It’s a great way to be, although in the really sad times, it can be difficult too. Jenny has been a happy person all her life though, so I think it is a habit. Even as a kid, Jenny filled her life with the happy girly things. That hasn’t changed either. Jenny is very stylish, and she can make an outfit out of a couple of looks that most of us would never think to pair up, but once we see them, we wonder why we couldn’t see it.

Jenny and her husband, Steve have three sons, Xander, Zack, and Isaac; as well as two daughters, Laila (who lives in Heaven) and Aleesia. The kids are getting older now, and all are in school full time, so about a year and a half ago, Jenny, who had been a stay-at-home mom, decided that she would like to get a part-time job, just to have a little mad money. Jenny had been telling her mom and my sister, Cheryl Masterson for a while that she wanted to get a job. The job of office runner at the legal firm where Cheryl works came up, and Cheryl had been going to mention it to Jenny for a few days, but hadn’t remembered to do it until a week or so later. The morning Cheryl called Jenny, she was literally just getting into her SUV to go look for a job! So, she came in and was hired on the spot…and the rest is history…sort of.

The job was and is perfect for Jenny, because Jenny is a helper, and always has been. She loves to help people, animals, and really every living creature! She doesn’t even step on a spider inside her house. She helps it get outside! Seriously! I would have to draw the line at spiders, so any spiders who don’t want to get squished should probably choose Jenny’s house over mine. Jenny had a specific type of job in mind, and the job of office runner was perfect. She wanted something part-time that would keep her busy and on her feet and moving continually for exercise and to stay in shape. Jenny did expand on the job of office runner in ways that the firm didn’t expect. She has made herself available for whatever anyone needs help doing. An office runner normally just takes documents to the courts or wherever anyone in the office needs work product delivered. They also relieve the front desk receptionist for her break and lunch. That was really all Jenny was required to do, but Jenny changed all that! Her willingness to help, and her desire to keep moving has endeared her to everyone in the office. She has expanded her own job description, without being asked. She is a go-getter, and she also has a listening ear. She listens to the people she works with, and learns their needs and their working style. That makes her a better assistant.

Jenny likes to spread sunshine. She likes to help anyone and everyone have a happy day. She is very sensitive to how people are feeling at any given time. If she senses they need a good word spoken to them, she chooses to be the one who gives it! She brings different thoughts and different ideas to those around her and that makes people like her. The firm really likes Jenny, and has offered her multiple other positions since she started working there, because of her personality and her willingness to work, but she has turned them down. She really likes her current job. The other positions would change everything for her…and for everyone else in the office. While they would like to see her advance, they would hate to lose her in the position she is currently in.

Something Jenny has never changed on is that her family comes first, and for her, the job isn’t about money. It’s about doing a little something extra with her time, and still being there for Steve and their kids. She likes being the runner, the helper! She doesn’t want to sit at a desk all the time, and she knows it! The job is made for her, and so are the hours. She’s truly the best office runner the firm ever had. She does a great job! Jenny brings happiness with her wherever she goes. She is a blessing to everyone who knows her, and in that office, they are grateful to have her. Today is Jenny’s birthday. Happy birthday Jenny!! Have a great day!! We love you!!