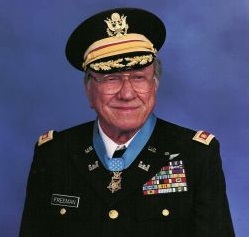 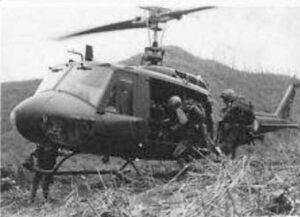 Ed Freeman first served in the military during World War II, in the United States Navy on the USS Cacapon (AO-52). While World War II was in no way uneventful or unimportant, it was not the most eventful part of Freeman’s service. Freeman decided to continue on in the military. Freeman had reached the rank of first sergeant by the time the Korean War began. By this time Freeman was in the Corps of Engineers, but his company fought as infantry soldiers in Korea. Freeman found himself fighting in the Battle of Pork Chop Hill, where he earned a battlefield commission as one of only 14 survivors out of 257 men who made it through the opening stages of the battle. His second lieutenant bars were pinned on by General James Van Fleet personally. He was given command of B Company and led them back up Pork Chop Hill.

It was Freeman’s childhood dream to become a pilot, and his new commission made him eligible to become a pilot. Nevertheless, there was one drawback. When he applied for pilot training he was told that, at six feet four inches, he was “too tall” for pilot duty. That phrase stuck, and he became known as “Too Tall” for the rest of his career. It was a devastating setback, but in 1955, the height limit for pilots was raised and Freeman was finally accepted into flight school. He first flew fixed-wing army airplanes, but later switched to helicopters. When the Korean War ended, he flew the world on mapping missions.

By this time, Ed W. “Too Tall” Freeman had already had many success stories, but his real success story came during the Vietnam War, during the Battle of Ia Drang, specifically on November 14, 1965. During the battle, there were multiple men injured and the possibility of them dying was very real. Their unit was outnumbered 8-1 and the enemy fire on the men on the ground was so intense from 100 yards away, that the Commanding Officer ordered the MedEvac helicopters to stop coming in. That was basically a death sentence for the wounded men. The men were at LZ X-Ray, one of the most legendary war sites in Vietnam. It was here that the United States had its first major battle with the North Vietnamese People’s Army of Vietnam, the first very violent round of a bout that would last ten more years. There was really no way for the MedEvac helicopters to save them. Enter, Captain Ed Freeman, who was not a MedEvac pilot, by the way. Nevertheless, that did not stop him. He could not leave a man behind, much less 29 men. That this was not his job, meant nothing to Freeman, who heard the radio call and decided he was going to fly his Huey down into the machine gun fire anyway. He had not been given orders not to go, because he was not a MedEvac pilot, so he went. Those men soon knew that Captain Ed Freeman was coming in for them. Freeman dropped his Huey in and sat there in the machine gun fire, as they loaded 3 men at a time on board. Then, he flew up and out through the gunfire to get these men to the medical teams safety. And, he didn’t go in just once!! He kept going back…13 more times!! He went in until all the wounded were out. No one knew until the mission was over that the Captain had been hit 4 times in the legs and left arm.

Ed “Too Tall” Freeman was born on November 20, 1927 in Neely, Mississippi, the sixth of nine children. At the age of 13, he saw thousands of men on maneuvers pass by his home in Mississippi. He knew then that he wanted to become a soldier. Freeman grew up in nearby McLain, Mississippi, and graduated from Washington High School, however, at age 17, before graduating from high school, Freeman served in the United States Navy for two years. He then returned to his hometown and graduated from high school after the war. He joined the United States Army in September 1948, and married Barbara Morgan on April 30, 1955. They had two sons. Mike was born in 1956, and Doug was born in 1962.

Freeman’s commanding officer nominated him for the Medal of Honor for his actions at Ia Drang on November 14, 1965. Unfortunately, not in time to meet a two-year deadline in place at that time. He was instead awarded the Distinguished Flying Cross. The Medal of Honor nomination was disregarded until 1995, when the two-year

deadline was removed. He was finally and formally presented with the medal on July 16, 2001, in the East Room of the White House by President George W. Bush. Freeman died on August 20, 2008, due to complications from Parkinson’s disease. He was buried with full military honors at the Idaho State Veterans Cemetery in Boise.