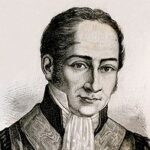 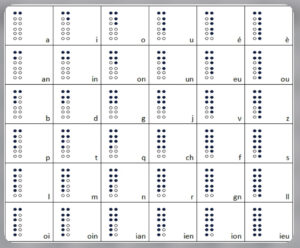 When we think of language, we think of a way to communicate, but we never really think of…safety. Why would we? After all, language is just communication, and can’t cause violence…can it? Well, it can, and never was that made more obvious than during the early 1800s, when Napoleon Bonapart’s French Army was involved in a war. At night, the soldiers would have a few minutes to read letters from home, but to do so, they had to turn on a lantern. Unfortunately, when the lanterns were turned on, the men became targets. Napoleon needed to find a way to allow his men to receive news from home, while also keeping them safe.

That was where a man named Charles Barbier came in. Barbier had served in Napoleon’s French army, and he was the one to develop a unique system known as “night writing” so soldiers could communicate safely during the night. As a military veteran, Barbier saw several soldiers killed because they used lamps after dark to read combat messages. As a result of the light shining from the lamps, enemy combatants knew where the French soldiers were and inevitably led to the loss of many men. The lanterns gave away their positions, and the enemy only had to shoot at the lights.

Barbier, came up with a raised dot system that communicated general words or sounds so the soldiers could effectively communicate necessities at night. It was very similar to modern day Braille, which is what it became when Louis Braille refined it. Braille was blinded at the age of three in one eye as a result of an accident with a stitching awl in his father’s harness making shop. After the accident, his eye became infected and spread to 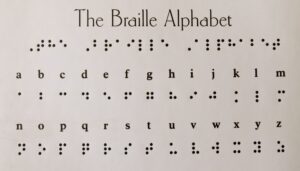 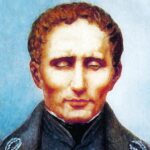 both eyes, resulting in total blindness. The “night writing” system on a raised 12-dot cell, two dots wide and six dots tall, didn’t work well, because while each dot or combination of dots within the cell represented a letter or a phonetic sound, the problem with the military code was that the human fingertip could not feel all the dots with one touch. When Braille refined it, it was very different, but it worked better, and that has become the well-known system we have today.