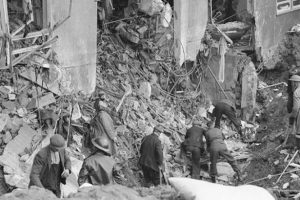 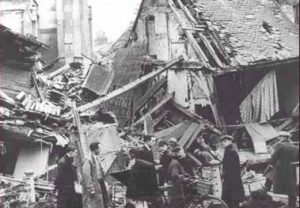 In the days leading up to America’s entrance into World War II, Hitler was becoming more and more volatile. It didn’t take much to set him off. On November 8, he had to move up his scheduled speech in Munich on the anniversary of his 1923 attempted coup in Bavaria because British bombers were on their way to take out a railway yard. Hitler was determined to avenge this daring offensive. The Fuhrer let his bomber pilots know that he was not “willing to let an attack on the capital of the Nazi movement go unpunished.” He immediately set about creating a plan to exact his revenge on Britain. Hitler didn’t wait very long. The chosen city would be Coventry, which is a city in the West Midlands, England…historically part of Warwickshire. The raid was scheduled for November 14, 1940, so Hitler had only 6 days to prepare for what would become the single most concentrated attack on a British city in World War II. Codenamed Moonlight Sonata, the raid lasted for 11 hours and involved nearly 500 Luftwaffe bombers, gathered from airfields all over occupied Europe. It was a brilliant moonlit night, so bright that the traffic could move around on the road without light. The Luftwaffe dropped 500 tons of high explosive, 30,000 incendiaries and 50 landmines. It was also trying out a new weapon, the exploding incendiary. The aim was to knock out Coventry as a major center for war production, but it was more than that. Hitler ordered the raid as revenge for the RAF attack on Munich.

On the appointed day, almost 500 German bombers unleashed Hitler’s fury on the British industrial city, taking out 27 war factories. Of the 568 people killed, more than 400 were burned so badly they could not be identified. Among the more than 60,000 buildings destroyed or severely damaged was the historic Saint Michael’s Cathedral. Coventry lost not only its great mediaeval church of Saint Michael’s, but it was the only English Cathedral to be destroyed in the Second World War. The city also lost its central library and market hall, hundreds of shops and public buildings, and 16th century Palace Yard, where James II had once held court. It is said that the smell and heat of the burning city reached into the cockpits of the German bombers, 6,000 feet above. More than 43,000 homes, just over half the city’s housing stock, were damaged or destroyed in the raid. The fire at the city’s huge Daimler works was one of the biggest of the war in Britain. Up to 150 high explosive bombs and 3,000 incendiaries turned 15 acres of factory buildings into a raging inferno. The people of the city were so traumatized, that hundreds wandered the streets in a daze and little children were seen trying to burrow their way through solid brick walls to escape the terrifying noise.

King George VI is said to have wept as he stood in the ruins of the burned out Cathedral, surveying the destruction. One man recalled being pursued down a street by a knee-high river of boiling butter from a blazing dairy. At one point during the night, an abandoned tram was blown over a house and into a garden. It landed with its windows still intact. At midday the next day in Coventry, it was as warm as spring and almost dark because of the effects of the firestorms. The official death toll from the night was 554, but the real figure could have been much higher with many people unaccounted for. As help poured in the next day, demolition crews had to be prevented from pulling down the Cathedral tower. They didn’t realize it had been leaning for at least 100 years. On the day of the mass funerals, fighter patrols were sent up into the skies above the city. It was thought that the Germans might try to bomb the cemetery. Following the raid, Nazi 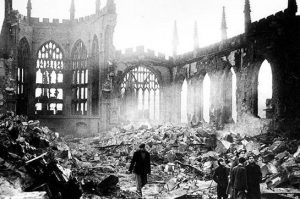 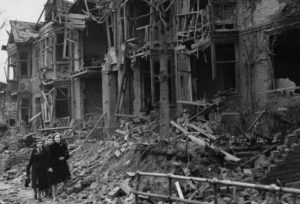 propagandists coined a new word in Germany…Koventrieren, meaning to raze a city to the ground…to Coventrate passed into the German language, meaning “to annihilate or reduce to rubble.” The raid was intended to bring complete hopelessness to Britain, but by 1947, Coventry had adopted Kiel, its first German twin city, and Dresden followed in 1956. The rebuilt Cathedral stands for international peace and reconciliation. Coventry is now the 9th largest city in England. 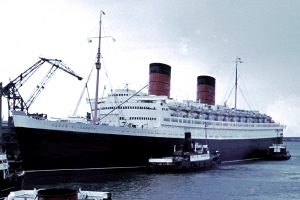 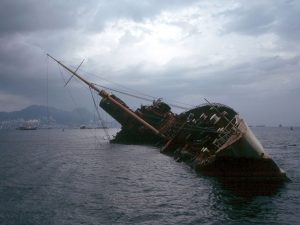