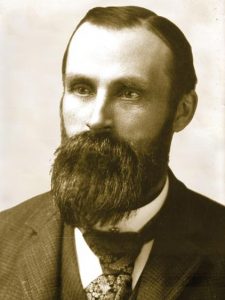 What would the modern farm be without the tractor? People in the 19th century knew exactly what it would be, even if they had no idea what a tractor was. John Froelich was born on November 24, 1849, in Iowa. His life would end up changing much in the agricultural industry. As an adult, Froelich operated a grain elevator and mobile threshing service. His job was to bring a crew to local farms every year at harvest time. He hired a crew and dragged a heavy steam-powered thresher through Iowa and the Dakotas, threshing farmers’ crops for a fee. I suppose it was a good way to make a living, but his machine was bulky, hard to transport, and expensive to use. To top it off, it was also dangerous…one spark from the boiler on a windy day, and he could find the whole prairie ablaze.

Froelich knew that this was no way to do business. He decided that he had to try something new. In 1890, instead of that cumbersome, hazardous steam engine, Froelich came up with the idea of a gas powered engine. The size comparison alone made it a far superior choice. So, he and his blacksmith mounted a one-cylinder gasoline engine on his steam engine’s running gear and set off for a nearby field to see if it worked. To their excitement, it did. The tractor

Traveled at a speed of three miles per hour. Of course, that was going to take them a long time to go from one location to another. The real test came when they took their new machine on the road for the annual threshing season. The good news is that the machine was a success there too. The crew threshed more than a thousand bushes of grain every day, 72,000 bushels in all, and they used only 26 gallons of gasoline. Of even greater importance, was that they did the whole thing without one fire.

It was time to take the project to the next level. Froelich found eight investors, and they formed the Waterloo Gasoline Traction Engine Company. They built four prototype tractors and sold two. Unfortunately, both were soon returned. Rather than lose the company, and to make money, the company branched out into stationary engines. That was somewhat more successful and its first engine powered a printing press at the Waterloo Courier newspaper. Froelich was happy 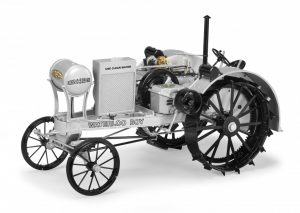 with the success, but that was really not where his interests were. He was into farming equipment and wanted to make an engine that worked for that. So he left the company in 1895. Froelich might have jumped the gun a little bit, because Waterloo kept working on its tractor designs. The designs still weren’t wildly successful, and between 1896 and 1914, Waterloo sold just 20 tractors in all. Success finally came when in 1914, the company introduced its first Waterloo Boy Model “R” single-speed tractor, which sold very well…118 in 1914 alone. The next year, its two-speed Model “N” was even more successful. In 1918, the John Deere plow-manufacturing company bought Waterloo for $2,350,000.