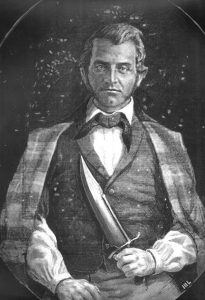 Duels weren’t always fought with guns, in fact most fights in the Old West weren’t really fought by duel or shootout. Most were actually drunken brawls that ended in a gunfire, but some fights, duels or brawls were fought with knives, and among the most famous knife fighters was a man named Jim Bowie. Many people think that he invented the Bowie knife, but in reality, the Bowie knife was invented by Jim’s equally belligerent brother Rezin Bowie. Resin came up with the design after nearly being killed in a vicious knife fight. Nevertheless, on September 19, 1827, it was Jim Bowie who made the knife famous when he killed a banker in Alexandria, Louisiana, using an early version of the Bowie knife. The Bowie brothers engaged in more fights than the typical frontiersman of the day, but such violent duels were not uncommon events on the untamed margins of American civilization. I guess some people just liked the bloody 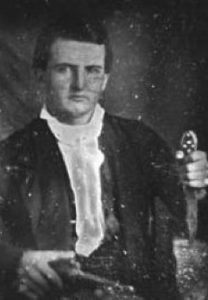 challenge more than other people. Personally, I don’t think that I would have the stomach for taking a life in such a manner, but then most of us really don’t want to kill someone at all. The Bowie brothers seemed to thrive on killing and fighting.

As time went on, most frontiersmen preferred knives to guns for fighting. I suppose they decided that they had a better chance against a knife than a gun. The Bowie knife quickly became one of the favorites, probably because it was scary all by itself. Often, when the Bowie knife was pulled out, the opponent had to quickly consider whether or not the fight was really worth the risk. The Bowie knife often discouraged many a would-be robber or attacker. The designs varied somewhat, but the typical Bowie knife sported a 9 to 15 inch blade sharpened only on one side for 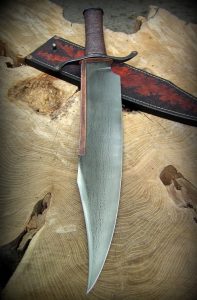 much of its length, though the curved tip was sharpened to a point on both sides. The double-edged tip made the knife an effective stabbing weapon, while the dull-edge combined with a brass hand guard allowed the user to slide a hand down over the blade as needed. It was the perfect knife for close-quarter fighting, and quickly became the weapon of choice for many westerners before the reliable rapid-fire revolver took its place in the post-Civil War era.

One would think that the Bowie brothers were outlaws, but in reality, they weren’t. They were landowners, and like many people in the Old West, sometimes they had to defend themselves. I suppose that as their fame grew, the need to defend themselves became a more common occurrence. While Rezin Bowie invented the Bowie knife, it was Jim Bowie who ultimately brought the knife its fame. After his first fight, men started going to a blacksmith to ask them to make a knife like Jim Bowie’s knife.