A few years back, I connected with a member of my Schumacher cousins, Tracey Schumacher Inglimo, in what would become a quest to get to know all of my Schumacher cousins, and like my Byer cousins, there were lots of them. The journey has been a wonderful trip, as my sisters and I have cultivated friendships with these precious cousins, some of whom we met on our 2014 trip back to our roots in Superior, Wisconsin. Now, four years later, my sister, Cheryl Masterson; her daughter, Liz Masterson; and I have returned to Superior, Wisconsin for a family reunion. We have been so excited for this reunion to happen, and in fact, have looked forward to reuniting with all of our cousins since we first met or found each other on Ancestry and Facebook.

The reunion took place today at Pattison Park, and it definitely lived up to every hope we had for it. These precious cousins were friendly, hospitable, and informative, while also being curious about us too. We all shared tons of stories about our families, and of course, pictures of our kids, grandkids, and great grandkids. We hugged on the little ones, most of whom looked at us with a sense of wonder as to who we were, and maybe even wondering if we should be hugging them at all…at least until their parents said it was ok. We moved from group to group, and person to person trying to get to know everyone, all the while knowing that there just wasn’t enough time. We found out who the jokesters were too, because what family would be complete without those wonderful people who keep us laughing. We built bonds that will last a lifetime, and parted ways with expressions of sadness that the time had passed far to quickly. We tried to see how soon we could feasibly do this again, knowing that for most of us Facebook would have to suffice until the next reunion.

The time went by far too quickly indeed, and while we wish we could have had far more time to sit and talk, we all knew in our hearts that we had been given a precious gift…a gift of family, friendship, love, and a sense of belonging, because after all, that is what family reunions are all about. Families grow quickly, and the numbers can quickly grow to a point of losing sight of the ones who started the family in the beginning, but at reunions, 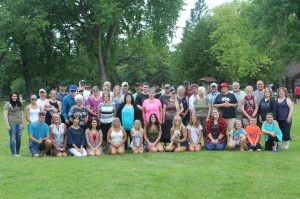 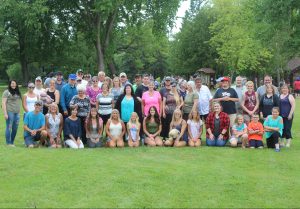 those who have left us are remembered and discussed, because everyone is trying to put into context, just exactly where they fit in with all these people. We talked of those who weren’t with us with love and sadness, because they would have really loved that their families have made the effort to keep the closeness going. To all those who made this reunion so very special, we love you and thank you for making our family reunion amazing.

The Meanness Coming Out 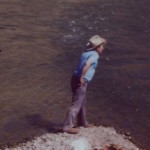 When my daughter, Corrie Petersen told me that her husband, Kevin and son, Josh weren’t feeling very well yesterday, I instinctively told her to tell them that they weren’t sick…it was just the meanness coming out. It’s a funny little saying my dad came up with to lighten the mood when we weren’t feeling well.  It’s funny that even when we weren’t feeling well, that comment never failed to make us giggle…along with rolling our eyes, and the whole, normal for kids comment…”Da-a-a-a-d!!” Then, Dad would always grin and try to look innocent, while saying something like, “Wha-a-a-t?” It was just the kind of comment my dad would make. Always act like you are totally innocent in the whole thing, right.

He was always coming up with these strange comments. I remember coming in from playing, crying because I had hurt myself in some minor way. If I stubbed my right big toe, Dad would offer to stomp on my left big toe, because it would make me forget about the pain in my right big toe. It was silliness that added a light tone to the drama that always seems to go along with a house full of girls. Dad was very outnumbered in our house, because with five daughters, he was the only male in the family. I suppose that it’s possible that his silliness was, in reality, a self defense mechanism. Imagine being the only man in a house full of women, five of whom could go from playing happily to squabbling in a matter of minutes.

Sometimes it was the things that people would never expect that we, and later the grandchildren and great grandchildren really liked…oddly. Things like the Whisker Rub, which is just what it sounds like. Dad would grab us and rub his end of the day whiskers across our face. I’m sure there are people out there who would cringe at that, and believe me when I say that Dad had a full face of whickers, but once he was done, we would invariably say, “Do it again, Daddy!!” It was a great game, and he never rubbed hard enough to make it hurt. It was just another way to lighten things up around our house, even if everyone was in a great mood already.

Dad always found creative ways of making us laugh, and maybe that was the reason that we hated it when he worked out of town for a time. His laugh was contagious, and he never really grew up, so playing often included Dad in some way. The grandchildren and great grandchildren can attest to that, because of the game where he sat right by the door of the kitchen, and the kids ran from kitchen to living room and back trying to get by him before he could swat them. They almost never succeeded, but they had a great time playing the 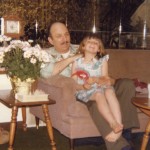 I love those great old memories. And I think it’s awesome that some totally unrelated event, like someone not feeling well, can trigger those precious memories from my childhood days. My only regret now is that we didn’t have the ability, forethought, and accessibility of the camera phone, to take pictures of those silly moments to add to the precious memories that we can only see in now our memory files. Those really were the good old days, and I miss them a lot. 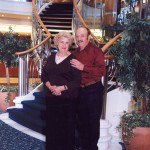 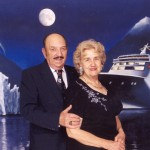