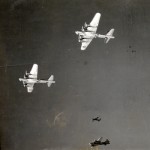 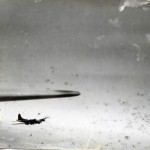 Yesterday, I read a tribute written by the grandchild of an airman who served in a B-17 Bomber during World War II, and I found myself both curious and a little annoyed by the first few lines of the story. Oh, I know that the writer was as proud of his grandfather, as I am of my dad, but when the story started out saying that in order to go home, those men had to fly twice as many missions as the 25 my dad’s group had to fly, I got really curious. My search for information would lead me to probably the same “bone chilling” feeling as the other author’s information had. The author’s grandfather, like my dad, was the flight engineer, except that he had been stationed in Northern Africa, where my dad had been in England, at Great Ashfield. While I don’t dispute his grandfather’s bone chilling missions, I’m nevertheless, not sure he understood what the fighting was like in England, and especially at Great Ashfield.

It is true that the crews at Great Ashfield only flew 25 missions before going home. The reasons are maybe even more bone chilling than the mission report the other author was reading. The article I found puts it like this. “The average life of a B-17 bomber at Great Ashfield was just over 4 months. Very few B-17 bombers that were transferred to the base lasted a complete tour of duty. The average Airman lasted 15 combat missions and few completed an entire tour of 25 missions. Much less 35 !!!! The average LIFE of a Ball Turret Gunner in combat was 12 MINUTES.” Thankfully my dad was not the ball turret gunner, but rather the top turret gunner…still, Great Ashfield was where my dad had served!!! And he was one of those “few” who lived to go home. His plane was one of those “very few” Bombers that lasted a complete tour of duty. In all the years that I have known about my dad’s war years, I guess that I didn’t really allow myself to think about what could have happened…probably because it was too hard to think about.

Even when Dad told me about the 3 Poplar trees at the end of the runway…the landmark that let them know that for another mission, at least, they were safely home. I can’t imagine what it must have been like to board that B-17 Bomber in the morning, not knowing whether or not you would see the base again…much less your family. Then to see those trees, and to know that you were safe, would be almost overwhelming.

I am no longer annoyed at the author of the other article, and I agree that his grandfather is just as much a hero as my dad is. Both of these men bravely stepped into those planes 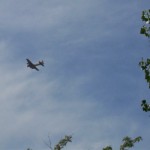 every time they were told to, and flew off into battle, not knowing if they would return. Rather than feeling annoyed, I feel a kinship to the other author, because had circumstances ended differently neither of us would have existed. Our lives are what they are, because his grandfather and my dad were among the few who survived battle in a B-17 Bomber, and among the few whose B-17 Bomber and the grace of God, brought them safely home to their families.