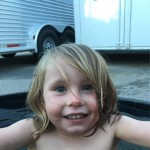 My grand niece, Reagan Parmely arrived the day after her mother, Ashley Parmely’s birthday, three years ago. She was the first grandchild of her grandmother, Jennifer Parmely. The addition of Reagan, and then a year ago, of her little sister, Hattie, have brought new life and lots at activity to the family. She is a busy girl, and she is teaching her little sister the ropes. Together, they keep their parents running. When the rest of your family is adults, the addition of two busy little girls can be a culture shock…even if the parents are active.

Having two daughters of my own, I can relate to the kinds of activity the Parmely family has going on these days. Reagan has had a busy summer, of swimming and playing outdoors. She and her little sister, Hattie have been spending time on the tricycle, with lots of sisterly teamwork used to make the tricycle go. The girls seem to be very good at teamwork, and Hattie is proving to be a power player in their sisterly operations…and between the two of them, there is always something going on. In fact, their mom tells me that about the only thing the girls aren’t into is, you guessed it…sleeping. 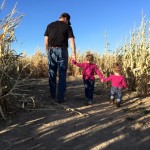 Reagan recently started pre-school, which will undoubtedly bring about a big change in her. There is no way to go from being a toddler at home with the family, to being a student, without the whole process changing you forever. A toddler quickly transitions into a child. They have seen a whole new world out there that goes beyond their own little corner of it. Suddenly, they discover that there are many children in the world. New playmates await them. Reagan has so much fun ahead of her, and I’m very excited for her. There is so much to learn. Her school career is just starting, and she will learn so much as she goes along. Reagan is such a smart little girl and I know that she will do well as a student. She loves learning new things. I think most kids do.

Back at home, Reagan is the big sister and mommy’s helper once again. Though she loves school, and the many new things she is learning there, she misses her family too. Reagan and her sister, Hattie are best 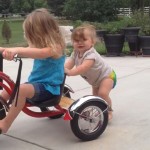 friends. That’s how it is with sisters. Sure, you may fight, but in the end there is no one that means more to a kid, other than their parents, of course. Reagan has so many things to show her little sister. Some of the greatest life lessons are taught by siblings, whether they know it or not. Reagan will play an active role in the person her sister, Hattie becomes. And Hattie will play an active role in the person her sister, Reagan becomes. The girls will be forever friends, because that is the awesomeness of having a sister. That is something I can attest to, coming from a family of sisters. They will grow in to a team as the years go by…Team Parmely!! I think we will see a lot of good things come from this team in the future. Today is Reagan’s 3rd birthday. Happy birthday Reagan!! Have a great day!! We love you!!