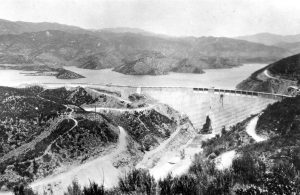 When the Civil Engineers build a dam, it is a structure that is expected to last for many years to come. The build dams for recreational purposes, as well as economic purposes. In August of 1924, civil engineers began construction of the Saint Francis Dam. The dam was to be a curved gravity dam located near Los Angeles in the San Francisquito Canyon, close to Santa Clarita. Chief Engineer William Mulholland supervised the project as a part of the Los Angeles aqueduct system.

The construction of the dam was completed on May 6th, 1926. While the dam was very new, it still began to exhibit signs instability and leaks shortly after the work was completed. Apparently, there were a few flaws in the construction of this dam. The problems with the Saint Francis Dam continued until on March 12, 1928 at 11:57pm, the dam suffered a catastrophic failure causing a massive flood with little to no warning for residents 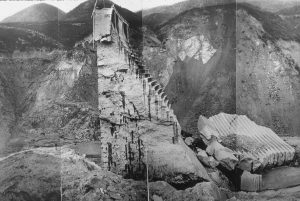 in the surrounding area. Many thought that the rumbling from the dam may have been an earthquake, only to find out very quickly that the dam had failed in a catastrophic way. Without warning, the flood water came rushing down the river and into the unsuspecting town.

The resulting flood left between 385 – 430 people dead according to some of the official estimates. In reality, the number may have been higher…possibly over 600 dead. The carnage caused the collapse to be considered one of the worst civil engineering failures in United States history. The flood waters…12 billion gallons strong were initially 140 feet high. Several Southern California towns suffered massive damage due to the collapse including Castaic, Saugus, Santa Paula, Saticoy, and Filmore. It was estimated that 1,200 homes were d 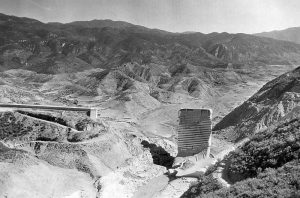 estroyed with damages in the $7 million range.

Investigations into the collapse found that issues with the dam’s foundation were at fault. It was also later reported that the dam may have been built on the site of an old landslide that could have contributed to the foundation issues. The collapse ended Mulholland’s career, because many people blamed him for the catastrophe, partially because he and his assistant had personally inspected the dam just 12 hours before the failure and had deemed it safe. It was determined that the dam would not be rebuilt, and what was left of the Saint Francis Dam was demolished in May of 1929.