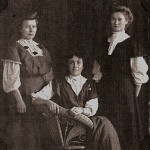 For some time now, I have been trying to find any information on the family of my Great Grandma Henriette Hensel Schumacher. The pictures we have of Grandma’s immediate family, which includes my grandmother, Anna Schumacher Spencer, always seem to include two cousins. We know that their names are Anna Schubring and Laura Kurth. We don’t know if those are maiden names or married names, and that makes this harder. Recently, I found a picture of a family, and I believe that the oldest girl is Laura Kurth. The other girls did not exactly look like Anna Schubring, but I thought that possibly this family was my great grandmother’s sisters family. She was the sister that my grandmother came to America with, and since her first husband died, and she remarried and had more children, That could explain the difference in the two girls features.

Last night I stumbled upon a little bit more information. The girls are not sisters, or even half sisters, as I had originally thought they might be. My sister, Cheryl thought that the father in the family picture looked a bit like our Great Grandfather Carl Schumacher, and thought he could be his brother. I now believe that she is right in that. What I found is a page from my Uncle Bill’s family history, but it wasn’t with the rest of his history books…it was in some pictures he had sent to my cousin, Tracey Schumacher-Inglimo’s family. This picture tells us that Anna Schubring is the daughter of one of Great Grandma Henriette Hensel Schumacher’s sister and that she came from Canada. Anna could possibly be the daughter of the sister that my great grandmother came to America with, whose husband died a short time later, and she remarried and had more children. Having a step father could also be part of the reason that Anna spent so much time with her Aunt Henriette’s family. Sometimes the step parent situation doesn’t work out so well for some of the children. If Anna is that child, then she has a sibling that would be from that first marriage too, but we don’t really have any information on that.

Laura Kurth is also a cousin, but on the Schumacher side, so Cheryl is probably right in that she thought the father in the family picture looked like our great grandfather, Carl Schumacher’s side of the family. Cheryl also thought that Anna looked older than Laura, so she might be correct in that too. Laura’s family lived in the Mazeppa, Minnesota area, which might explain why she spent a lot of time with her Aunt Henriette and Uncle Carl’s family…not 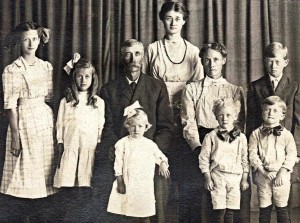 to mention that she and my grandma, Anna Schumacher Spencer were fairly close in age. I am also assuming that Kurth was Laura’s married name, and that her dad was the Schumacher brother, but I could be mistaken in that too, and it could be that her mother was the blood relation to my great grandfather. I may never find out for sure just how these cousins fit into our family, but I will most likely not stop looking until I do find out. Nevertheless, these pictures lad me to believe that my great grandparents were very close to their siblings, even if there is a sense of mystery to my family and their elusive ancestors too.