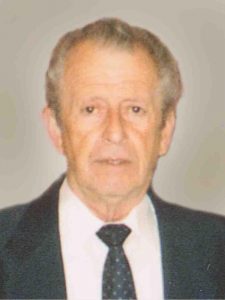 Plane crashes are always tragic events. The loss of life and property is devastating. Sometimes, however, a pilot and his crew are able to pull off a landing in unbelievable circumstances. Something like that leaves everyone from the passengers, families, the NTSB, and the world scratching their heads in disbelief. Years ago I watched a movie about just such a flight. The flight was Air Canada Flight 143. A couple of days ago, I saw that it was the 33rd anniversary of that flight which occurred on July 23, 1983, and I thought about what a miracle that whole situation was. Canada Air had just made the conversion from pounds of fuel to kilograms of fuel. Unfortunately, as is often the case in these types of conversions, things were not converting as smoothly as the airline had hoped. On 22 July 1983, Air Canada’s Boeing 767, registered as C-GAUN, c/n 22520/47, from Toronto to Edmonton where it underwent routine checks. The next day, it was flown to Montreal. Following a crew change, it departed Montreal as Flight 143 for the return trip to Edmonton via Ottawa, with Captain Robert (Bob) Pearson and First Officer Maurice Quintal at the controls. The crew had been somewhat leery of taking off with the fuel indicator taped off as inoperable. It would seem logical to most of us that Air Canada should have waited until all systems were operable before using the plane, but that was not the case.

The flight seemed to be going smoothly, but about half way between Montreal and Edmonton, at an altitude on 41,000 feet, the aircraft’s cockpit warning system sounded, indicating a fuel pressure problem on the aircraft’s left side. Assuming a fuel pump had failed, the pilots turned it off, since gravity should feed fuel to the aircraft’s two engines. In most situations, that would have worked, but when the plane was fueled, the technician failed to accurately convert the fuel from pounds to kilograms, and the plane had run out of fuel. Running out of fuel 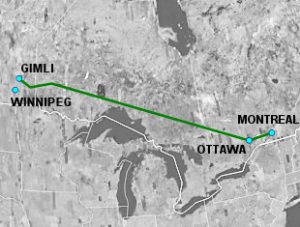 in a small plane, flying at much lower altitudes has been known to get people killed, but this was a Boeing 767, and it was at an altitude of 41,000 feet. This had all the makings of a disaster…but somehow, that was not what happened. In this case, the event would prove to be the finest hour for the pilot and crew.

The passengers on this plane had the unusual advantage of having at the controls, a pilot who was an experienced glider pilot. Now, as you know gliders have no fuel in them. You are pulled into the air by another plane and then released to glide in for a landing. That’s an easy enough task for a trained glider pilot in a glider plane, but this was a modern day, wide body jet. The idea of gliding this plane in for a safe landing was…well, unheard of. Robert “Bob” Pearson was that pilot, and with the help of his crew and an air traffic controller, he safely glided the plane into an abandoned Royal Canadian Air Force airstrip that was being used as a drag strip…at the very moment of the landing of the plane. The men could not see that, however, until they were almost on top of the people. Thankfully, the people on the runway saw the plane and got out of the way.

The crew had hoped to make Winnipeg, but with the best glide speed and the rate of descent, there was no way. Then, Quintal remembered Gimli, and the abandoned strip became their last hope. They were too high for it, so Pearson performed a slip, which is a glide maneuver to increase drag, causing the plane to lose altitude quickly. To add to the problem, the nose gear came down, but did not lock as the rest of the gear had. Could things have been more dire? In the end, Captain Pearson executed the landing perfectly, in spite of all of the problems, and the fact that the Winnipeg Sports Car Club was on the field with everything needed to assist in 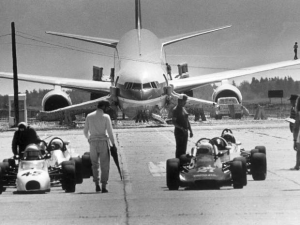 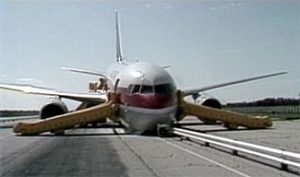 this emergency, the plane landed without a single death in the plane or on the ground, and the fuel starvation scenario became part of the pilots training in their simulators. The first pilots to try the program in the simulator all crashed, and believed that it was an impossible scenario, until they were told that it had happened, and that the pilot landed safely. The flight has since been dubbed the Gimli Glider. And, that’s a miracle for the books.