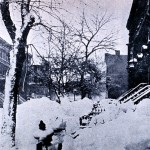 As we sit here, with an early Spring upon us, I find it an odd thing to think about another year that had been rather balmy too. The year was 1888, and things were about to get serious along the northern East Coast. The day began with rain, but as the storm really came at around midnight, the rain turned to snow, and the area began to become a nightmare right before the very eyes of the people in the area. Snowfalls of between 20 to 60 inches were seen in parts of New Jersey, New York, Massachusetts, and Connecticut. The winds howled…sustained winds of more than 45 miles per hour producing snowdrifts in excess of 50 feet. The area railroads were shut down and people were confined to their houses for up to a week. The difficult thing here is that people didn’t have some of the weather predictors that we have these days, so many of them had no idea what was coming their way, and so had far k=less time to prepare for it.

Areas of northern Vermont received from 20 inches to 30 inches in this storm, with drifts reported from 30 to 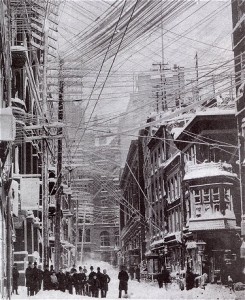 40 feet over the tops of houses from New York to New England. There were also reports of drifts covering 3 story houses. The highest drift…52 feet was recorded in Gravesend, New York. A total of 58 inches of snow fell in Saratoga Springs, New York; 48 inches in Albany, New York; 45 inches of snow in New Haven, Connecticut; and 22 inches of snow in New York City. With the snow came severe winds, with gusts up to 80 miles per hour, although the highest official report in New York City was 40 miles per hour, with a 54 miles per hour gust reported at Block Island. Central Park Observatory, in New York City, reported a low temperature of 6 °F, and a high temperature of 9 °F on March 13…the coldest ever for March. These days Winter Storms have names, but they didn’t then. Nevertheless, the storm was named the Great White Hurricane. It paralyzed the East Coast from the Chesapeake Bay to Maine, as well as the Atlantic provinces of Canada. The Telegraph was disabled because of all the downed lines, isolating Montreal and most of the large northeastern United States cities from Washington DC to Boston for days. Following the storm, New York began placing its telegraph and telephone lines underground to prevent destruction. From Chesapeake Bay through the New England area, more than 200 ships were either grounded or wrecked, killing at least 100 seamen.

In New York, all transportation was at a standstill for days, and drifts across the New York–New Haven rail line at Westport, Connecticut took eight days to clear. Partly because of the transportation gridlock, it was decided that they needed a better system, and the first underground subway system in the United States, opened nine years later in 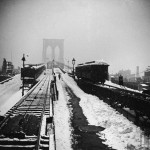 Boston. The New York Stock Exchange was closed for two days…something that almost never happens. Firefighters were unable to get to the fires, and property loss just from the fires was estimated at $25 million. Severe flooding occurred after the storm due to melting snow, especially in the Brooklyn area, which was more susceptible to serious flooding. Efforts were made to push the snow into the Atlantic Ocean. More than 400 people died from the storm and the cold that came with it, including 200 in New York City alone. Among them was former United States Senator Roscoe Conkling. The blizzard also resulted in the founding of the Christman Bird and Wildlife Sanctuary located near Delanson, Schenectady County, New York, which was listed on the National Register of Historic Places in 1970.