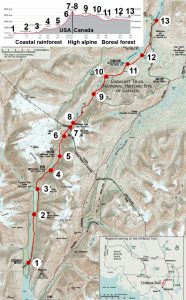 As one who loves to hike, I am always interested in a new trail, whether I will ever get to hike that trail or not. The Chilkoot Trail is a 33 mile trail that travels through the Coast Mountains. The trail travels from Dyea, Alaska, in the United States, to Bennett, British Columbia, in Canada. During the Klondike Gold Rush (1896–1899), the Chilkoot Trail was transformed into a mainstream transportation route to Canada’s interior. The gold rush was primarily focused around Dawson City in Yukon and the Yukon River. While not the easiest trail, the Chilkoot Trail was the most direct, least expensive, and consequently the most popular.

The other primary route, the White Pass route based out of Skagway, was slightly longer but less rigorous and steep, whereas the Chilkoot was shorter and more difficult. Skagway, because of its deepwater harbor, served as the principal port for both routes…nearby Dyea, the beginning of the Chilkoot Trail, was built on the extensive, shallow Taiya River delta. Prospectors who chose the Chilkoot Trail were ferried to Dyea by small boat. The trails turned Skagway and Dyea into bustling tent cities during the gold rush years, which caused men from across the United States to leave their jobs 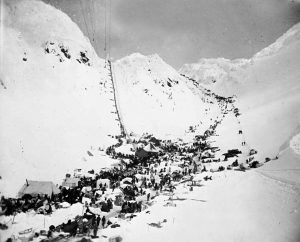 and family to travel up the Inside Passage to Skagway. They had gold on their minds, and the thought of going home rich was all they could think about. Most weren’t successful, and many didn’t make it there or back, but many went.

I don’t think this would be a trail I would want to be on in the winter, but it might be interesting in the summer months. There are many trails in the world that I would love to hike, but many of them I would probably only hike one time. I always find the history of the many trails that weren’t just for hiking originally, to be very interesting.