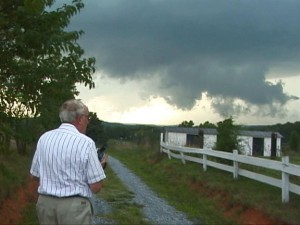 I think that were it not for the danger involved, I could be a storm chaser. I love to watch the shows about storm chasers and about tornadoes themselves. I suppose the main reason I like those shows is that you can watch the awesomeness of nature’s storms, but you don’t really have to deal with the reality of the loss of life and damage to property. It seems more like a scene from a movie. Nevertheless, the reality is that in a real storm situation, tornadoes kill and they damage property. The first recognized storm chaser was David Hoadley, who began chasing North Dakota storms in 1956. Hoadley used data from area weather offices and airports to calculate the possible areas for tornadic activity. Hoadley is considered the pioneer storm chaser and was the founder of Storm Track magazine. With storms such as the Tri-State Tornado which occurred on this day, March 18, 1925, and many others that followed, I’m sure that Hoadley could see that there was a need for someone to find a way to predict the path of these deadly storms. 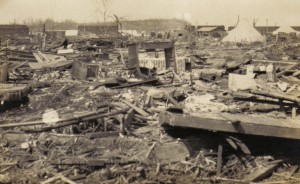 The March 18, 1925 tornado traveled across the tri-state area of eastern Missouri, southern Illinois, and southern Indiana, killing 695 people, injuring some 13,000 people, and causing $17 million in property damage. It became known as the Tri-State Tornado, and it shocked the nation. The tornado first touched down in Ellington, Missouri at about 1:00pm, but the worst hit area was southern Illinois. More than 500 of the 695 people lost dies in Illinois, including 234 in the city of Murphysboro and 127 in West Frankfort.

In all, the Tri-State Tornado traveled 219 miles in it’s path of destruction, and was on the ground more than three hours. It ripped through 164 square miles and was more than a mile wide. It traveled at speeds of more than 70 miles per hour. There has never been a worse tornado in the history of the United States. Years after the Tri-State Tornado, scientists discovered the cyclic nature of tornado-producing thunderstorms. These 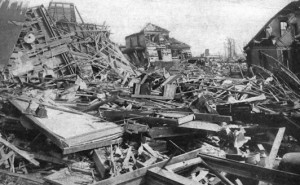 storms are able to produce one tornado after another, in a seemingly continuous damage path, that could easily be mistaken for a single tornado, when they were actually a family of tornadoes. Of course, with all the time that had passed, and the lack of things like Doppler Radar to see what the storm really was, it is nearly impossible to determine 91 years later whether or not the Tri-State tornado was one or a family of tornadoes, it remains in the history books as the longest-tracked and deadliest single tornado in recorded history. I have to wonder if David Hoadley, or someone like him had been able to predict these storms, maybe the loss of life would have been much lower.