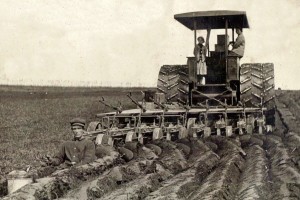 Sometimes I think my family had a lot of comedians in its past. As I look through the pictures from every part of my family, I continue to come up with pictures that are obviously staged intending to get a reaction. So many of the pictures I have seen from the past have families sitting in a studio without one smile among them, so it is surprising to see random pictures that show the subjects posed in odd ways or acting out  moments of the old west. At first I thought these were post cards…until I recognized my grandfathers and other family members in the pictures. They were just posing for pictures that they could send back home to get a laugh out of the family back there, or just to show their friends. Either way, it tells me that my family has some great imaginations or a funny bone.

When I first looked at this picture, I didn’t notice anything unusual, but upon closer examination, I saw the man I believe to be my great uncle low to the ground in front of the plow. At first I thought I was seeing things. I looked again thinking it might be a child, but it was definitely a man. Then I wondered how he was so low to the ground. He looked like he was in a hole up to his waist, but that was not the case. No, he was actually sitting in the furrow, so that it looked like he had just been plowed up. And the funny thing was that he was able to keep a perfectly straight face. Now I would have been laughing for sure if I was trying to pull that off. I guess that there are people who just have a knack for keeping a straight face in a joke situation.

Now that isn’t always the case, however. When my grandfather was involved 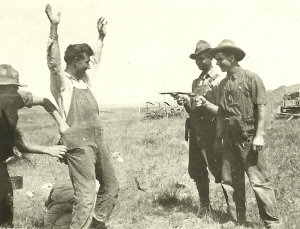 in a mock hold up, they simply couldn’t keep a straight face, including the intended victim. Those situations can be as funny as the ones where the comedian can keep a straight face, because when they get to laughing, it is contagious. You just laugh in spite of yourself. And that’s ok too. I have found many interesting characters in my family’s past, and they are each interesting in different ways. I think I would have enjoyed very much getting to know all of them. The comedians would have been especially fun, because there would never be a dull moment, and when you think about it, we can all use a good laugh from time to time.