I think most people have heard of the Great Chicago Fire of 1871, but few have heard of the Great Peshtigo Fire of 1871, that started the same day, October 8, 1871. I’m sure that Chicago, being a much bigger city, made it a fire that stuck in the minds of the people, but in reality, the Great Peshtigo Fire was far more deadly. The Chicago fire burned an area about four miles long and almost a mile wide through the Windy City, including its business district. The fire destroyed thousands of buildings, killed an estimated 300 people and caused an estimated $200 million in damages. That is a horrible fire, and a horrible loss of life and property, but it truly pales in comparison to the Great Peshtigo Fire. The Great Peshtigo Fire took place in the area around Peshtigo, Wisconsin and the death toll was estimated at around 1,500 people, and possibly as many as 2,500. I suppose that it seems odd for the estimate to be a difference of as many as a thousand people, but when the fire was finally out, twelve communities were destroyed. An accurate death toll has never been determined because local records were destroyed in the fire. Between 1,500 and 2,500 people are thought to have lost their lives. The 1873 Report to the Wisconsin Legislature listed 1,182 names of deceased or missing residents. In 1870, the Town of Peshtigo had 1,749 residents. More than 350 bodies were buried in a mass grave, primarily because so many had died that no one remained alive who could identify many of them. In the end, over, 1,875 square miles, or 1.2 million acres of forest had been consumed, an area approximately twice the size of Rhode Island. Some sources list 1.5 million acres burned.

The Peshtigo Fire was a forest fire that took place on October 8, 1871 in and around Peshtigo, Wisconsin. It was a firestorm that caused the most deaths by fire in United States history. A firestorm is a destructive fire which attains such intensity that it creates and sustains its own wind system. It is most commonly a natural phenomenon, created during some of the largest bushfires and wildfires. The biggest problem in 1871 was the 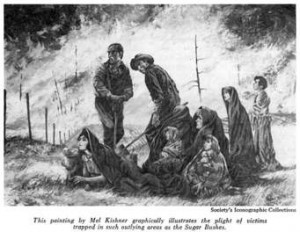 prolonged and widespread drought and high temperatures, capped off by a cyclonic storm in early October. The blaze began at an unknown spot in the dense Wisconsin forest. It first spread to the small village of Sugar Bush, where every resident was killed. There was simply no way of escape for them. High winds then sent the 200 foot flames racing northeast toward the neighboring community of Peshtigo. Temperatures reached 2,000 degrees Fahrenheit, causing trees to explode in the flames. The setting of small fires was a common way to clear forest land for farming and railroad construction. On the day of the Peshtigo Fire, a cold front moved in from the west, bringing strong winds that fanned the fires out of control and escalated them to massive proportions. A firestorm ensued. In the words of Novelist Denise Gess and historian William Lutz, “A firestorm is called nature’s nuclear explosion. Here’s a wall of flame, a mile high, five miles (8 km) wide, traveling 90 to 100 miles per hour (160 km/h), hotter than a crematorium, turning sand into glass.”

It would be impossible for most of us to imagine the way the people in that area felt that night. For so many of them, the way of escape, and with it, the hope of life disappeared in a matter of minutes. They didn’t know that the fire was coming until it had cut off their way of escape. Whole families were wiped out, and for the parents…well, I can’t imagine the sick feeling they had, knowing that they could not save their children. The fear the children must have felt, and the fear their parents shared with them…but, nothing could be done. They could only sit and wait for the end, trying not to speak the thoughts they were thinking…trying to give the children comfort and peace, even though their short lives were all they were going to get. So much has been learned over the years about drought and red flag (severe fire danger) days, but back then, they did not have the tools we have now, that can warn us of red flag situations, and even now, there are wildfires that destroy 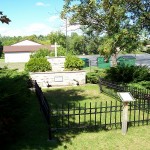 miles and miles of land, and with it towns and homes. If that can happen these days, I can only imagine how easily it could have happened then. Many people have called the Great Peshtigo Fire, the forgotten fire, but in recent years America’s “forgotten fire” has proven to be anything but. The tragedy is a subject of inquiry and debate among meteorologists, astronomers and conservationists. It has been dramatized by novelists and playwrights. It continues to fascinate history buffs and frustrate genealogists, which is where I come in. While the list of the dead from the Great Peshtigo Fire, does not include names I know to belong to my family, the idea of a thousand people unaccounted for in any way, makes me wonder if some of the Wisconsin connections I have been unable to make could be among the lost ones of the Great Peshtigo Fire.