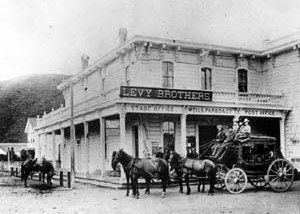 Of the men who headed west to strike it rich during the California Gold Rush, and other gold finds in history, relatively few ever found real success in the ventures. Many ended up becoming farmers or heading back east, but a few chose a different path. It always seems that when some people feel like they were gypped in something, they look for a way to even the score, as it were. That was how Charles Boles felt, after abandoning his family for the gold fields of California. When his dream of striking it rich didn’t materialize, he turned to a life of crime, but like most criminals, he left a clue that would eventually send him to prison for his crimes.

In the mid-1850s, much of the output of gold from California was transported by stagecoach and Wells Fargo wagons. Their routes often took them through isolated areas, when few lawmen were, making them prime locations for a robbery. And the outlaws in the area were quick to take advantage of those lonely stretches of roads. This type of robbery was so popular, in fact, that the company lost more than $415,000 in gold to outlaw robbers. In today’s market, that would have been worth over $12,000,000, making the loss a big motivator for the company to stop these robberies. 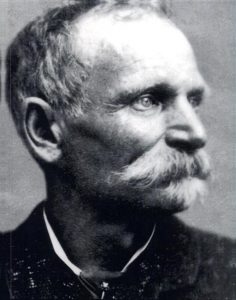 It was during this time that Charles Boles made his entry into a life of crime, using the name of Black Bart. It is believed that Black Bart’s first stagecoach robbery took place in July of 1875. He was wearing a flour sack over his head, with holes cut in it for his eyes, and a fancy gentleman’s black derby hat. I’m sure that was quite a sight to see. He intercepted a stagecoach near the California mining city of Copperopolis. Guards spotted gun barrels sticking out of nearby bushes, they handed over their strong box to Boles. He cracked open the box with an axe and escaped on foot with the gold, leaving his “gang” of camouflaged gunmen behind. When the guards returned to pick up the box, they discovered that the “rifle barrels” were just sticks tied to branches. I’m sure they were very frustrated at that point, but the deception had worked, and the money was gone.

After the success of his first robbery, Black Bart decided that he had found his niche. He proceeded to make a series of stagecoach robberies, becoming notorious. One thing to his credit was that he never shot anyone nor robbed a single stage passenger. His daring style gained him a degree of fame…that and the occasional short poems he left behind, signed by “Black Bart, the Po-8.” Wells Fargo, was not amused, however. The company set it’s private police force the to the task of capturing the bandit, dead or alive.

After several years of searching and tracking down clues, Wells Fargo detectives finally located Boles. On this day, November 3, 1883, the authorities almost catch Black Bart, but he managed to get away. His one mistake was that he dropped an incriminating clue that eventually sent him to prison. Black Bart was arrested and tried. He plead guilty and received a sentence of six years in San Quentin prison. He served just over four years and then was transferred to Harrisburg, Pennsylvania, after receiving a pardon. In all, Black Bart had only stolen $18,000 during the eight years of his criminal career, which in today’s market would have been $529,143.