Jack Of All Trades 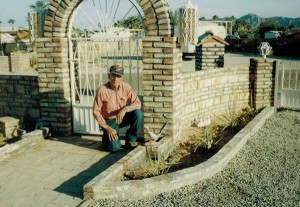 When you have known someone a long time, you assume that you know pretty much everything about them. That is not always the case, however. Sometimes, you learn great things about people after the have passed away. Such was the case with my father-in-law. I always knew that he was a very capable mechanic. He had also trained himself to do cement work, carpentry, and masonry work…building their house himself back in the 70’s, when my girls were just little toddlers.  His skill in building that home amazed me. He just instinctively knew how to do it…or so it seemed to me at the time, and maybe it was so. People sometimes to have a skill they just come by naturally, and without any real training.

I also knew of all his craft skills. He could re-weave lawn chairs with the design of the person’s choice, and he could make lawn decorations, such as whirligigs, birdhouses, and tin men. He was well known around Casper, and even had a story written about him in the Casper Star Tribune. All that work kept him pretty busy in his retirement years, and with his passing there have been a lot of people who miss him very much…you see, part of his charm was that he didn’t just make something and sell it to y0u, he talked to you…got to know you…and made you his friend.

Still, when you are a self taught, jack of all trades, one would expect that the work you do is…along the lines of simple…nothing elaborate. With my father-in-law, that couldn’t be further from the truth. When I was looking through the pictures we took from his home, I came across some pictures of masonry work he did while Snow Birding in Arizona. He was never a man to sit around and do nothing, so even though he was supposed to be retired…and relaxing, here he was building patios, steps, and garden enclosures in Arizona. I suppose that the fact that the work was done in Arizona, and the fact that my 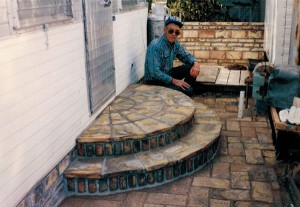 father-in-law was never a man to brag on himself, makes it a little less surprising that I didn’t know about this work.

When I looked at the pictures of the work he had done, it occurred to me that I didn’t know him as well as I thought I did. Here was a very talented man…self taught, to be sure, but amazing well taught too. The work is beautiful, I’m sure you will agree. Today would have been my father-in-law’s 84th birthday, and it is the first his family has spent without him. Happy birthday in Heaven Dad!! I know it will be a great day!! We love and miss you very much!!