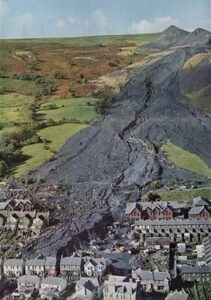 On the morning of October 21, 1966, a catastrophic collapse of a colliery spoil tip occurred on a mountain slope above the Welsh village of Aberfan, near Merthyr Tydfil. A spoil tip, also called a boney pile, culm bank, gob pile, waste tip, or…in Scotland, bing, is a pile built of accumulated spoil…waste material removed during mining. These waste materials are typically composed of shale, but they also contain smaller quantities of carboniferous sandstone and other residues. Spoil tips are not formed of slag, but in some areas, such as England and Wales, they are referred to as slag heaps. The area near Aberfan overlaid a natural spring, and a period of heavy rain led to a build-up of water within the tip which caused it to suddenly slide downhill as a slurry. The disaster killed 116 children and 28 adults, as it engulfed Pantglas Junior School and a row of houses. The accident left just five survivors and wiped out half the town’s youth. The Aberfan disaster became one of the United Kingdom’s worst coal mining accidents, but strangely it isn’t anything like a normal coal mining accident.

The colliery spoil tip was the responsibility of the National Coal Board (NCB), and the inquiry into the disaster placed the blame on the organization, also naming nine employees. When everything broke loose, the resulting landslide sent 140,000 cubic yards of coal waste in a tidal wave 40-feet high hurtling

down the mountainside where Merthyr Vale Colliery stood. The slide destroyed farmhouses, cottages, houses, and part of the neighboring County Secondary School. The avalanche is thought to have been the result of shoddy construction and a build-up of water in one of the colliery’s spoil tips…piles of waste material removed during mining.

Like many countries and areas, Wales was known for coal mining during the Industrial Revolution. Aberfan’s colliery opened in 1869. It didn’t take long for it to run out of space for waste, and by 1916 the space on the mountain valley floor was full. At that point, the colliery started “tipping” on the mountainside above the town. In 1966 it amassed seven tips containing 2.7 million cubic yards of colliery spoil. 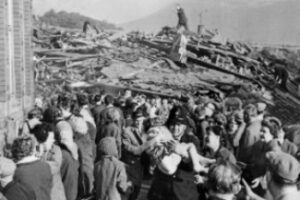 before the incident, following a non-lethal accident on the colliery. Unfortunately, they took no action at that time, and the issue was never addressed. The tip that fell on October 21 covered material that previously slipped. The disaster received widespread national attention. Queen Elizabeth II did not visit the site until eight days after the accident, and she admitted later that not going sooner was one of her biggest regrets. Once the disaster happened, little can be done to fix the matter, but the Mines and Quarries (Tips) Act was passed in 1969 to add provisions when using mining tips, among other things. Sadly it was too late for those lost, but it was good news for future miners and the surrounding towns.