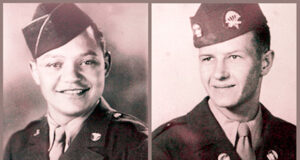 There were a number of events that took place on June 6, 1944, also known as D-Day. The areas of the Allied attack were miles away from each other. Early that morning, the Allies dropped thousands of allied paratroopers behind enemy lines in anticipation of the invasion of Normandy. It seems a strange idea to drop them behind enemy lines…like it was a big mistake. Nevertheless, one of the main objectives of the 101st Airborne was to capture the small village of Angoville-au-Plain. Then, when intense fighting broke out over the village, they dropped two American medics, Robert Wright and Kenneth Moore, in to set up a medical station in the tiny town 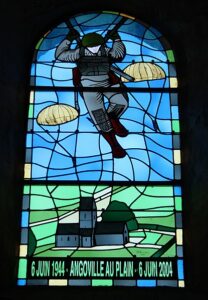 The plan to take over the village worked quickly and well. United States paratroopers established control of Angoville-au-Plain, but just as quickly, German units counterattacked and forced American troops back. Because of multiple injuries, Wright and Moore stayed behind. Suddenly they found themselves in danger when German soldiers entered the church. At first the German soldiers were hostile to the Americans, but then they realized that the medics were treating their wounded, as well the Allied wounded. The German troops could have attacked the men, and walked away without penalty, but instead, they left, posting a Red Cross flag at the entrance.

The fighting in the area raged on for three days, and the village changed hands several times, but the two medics never missed a beat. Over the course of the three days, they saved 80 lives, including a local teenager. The amazing part of the whole thing wasn’t just that they saved the lives, but also that the German soldiers didn’t kill them

Today, all of the stained glass windows in the church (the originals were destroyed in the battle) are tributes to Wright, Moore, and the 101st Airborne. Wright visited the church in 2004, and some of his ashes were spread in Angoville-au-Plain’s cemetery as per his request, following his death on December 21, 2013. Moore passed away on December 7, 2014.