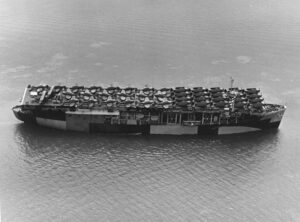 When I think of bravery, the “Woolworth Carriers” come to mind as one group of many. In the second half of World War II, the so dubbed “Woolworth Carriers” were escort carriers that were clumsy, slow, and without armor, and yet, they lead the way in dangerous waters for the American and British navies. The ships were versatile, unsung workhorses, and the men who served on them were heroes in every way. There is no way these men could have thought that they were ever safe from attack…they were a virtual target, and they knew it.

The so-called “Woolworth Carriers” shepherded convoys, hunted submarines, supported amphibious landings, and ferried men and planes in the Atlantic, the Mediterranean, the Pacific, and the Arctic at a time when U-Boats were seemingly everywhere. Although mocked as the “Woolworth Carriers,” and also called by other more “unprintable names,” the “combustible, vulnerable, and expendable” ships performed a gallant and vital role in the Allied crusade against fascist tyranny. And they did it very much unprotected.

The concept of these “Jeep” flattops and ocean-going “Model Ts” dated back to the mid-1930s. The boats were called by many names, most of them intended to be almost insulting. They were a part of a time when America, Great Britain, and Japan were investigating the possibility of converting merchant ships into small aircraft carriers. I suppose it could have been almost an innovation that had simply not seen its time yet. The idea for these ships was first initiated during World War I. As early as 1935, the United States Navy’s Bureau of Construction and Repair studied the possibility of converting 10 passenger liners for military use, and they drew up plans for taking “quick action” in the event that a war emergency created the need for such vessels. Of course, the planes of World War I were much smaller, so that part of the idea now made no sense. By 1935, the Navy was already building a powerful fleet of big flattops ships to accommodate the larger planes, so the proposals for auxiliary carriers were soon put aside. Navy Secretary Frank Knox told the United States Maritime Commission in late 1940, “The characteristics of aircraft have changed, placing more exacting demands upon the carrier. These demands are such that a converted merchant vessel can no longer make as satisfactory an aircraft carrier as was the case when the plans for those vessels were being drawn.” British Prime Minister Winston Churchill saw the auxiliary flattops’ potential for quickly replenishing the Royal Navy’s crippling combat carrier force losses, although I don’t know how these small ships could help anything. President Franklin D Roosevelt also liked the concept, thanks to the influence of shipbuilder Henry J Kaiser. Shipyards owned by Kaiser were ready to gear up for wartime production.

FDR proposed the experimental acquisition and conversion of a merchant ship of 6,000 – 8,000 tons displacement, to Admiral Harold R. “Betty” Stark, chief of naval operations. The plans called for the “carrier” to be fitted with a flight deck and equipped with about 10 helicopters or 10 planes with low landing speed. Stark and his aides went to work through January 1941 on Roosevelt’s proposal, one requirement of which was that the merchantman selected for conversion should have a sister ship that could be similarly converted for use by the British, who had been at war for a year and a half. On January 7, the Maritime Commission advised the Navy Department that the two C-3 diesel-powered cargo ships Mormacmail and Mormacland. Both ships were 492 feet long and 9,000 tons, and would be made available for conversion to carriers. The conversion project was estimated to take 18 months, but FDR imposed a deadline of three months instead. Stark actually finished a little under the three month deadline.

Acquired for conversion on March 6, Mormacmail’s was recommissioned on June 2, as USS Long Island (CVE-1). Long Island was not used in combat, but did ferried aircraft to Pearl Harbor shortly after the Battle of Midway and carried 19 Grumman F-4F Wildcat fighters and a dozen Douglas Dauntless SBD dive-bombers to Espiritu Santo for use on Guadalcanal in late August 1942. The Navy used her to train carrier pilots and ferry troops for the rest of the war. The converted Mormacland was turned over to the Royal Navy as HMS Archer on November 17, 1941. It was the first of 39 American-built escort carriers provided under the Lend-Lease program, and it did serve in the Battle of the Atlantic.

Four more merchant hulls were rebuilt into escort carriers for the British, and made ready for service in the spring and summer of 1942. They were Avenger, Biter, Dasher, and Charger. The United States Navy rescinded the Lend-Lease transfer order for the Charger, which was commissioned on March 3, 1942, as its second escort carrier. Ironically, the first Allied escort carrier to see combat was of enemy origin. The 5,527-ton, 15-knot German merchant ship Hannover was captured in the West Indies in March 1940 by a British light cruiser and a 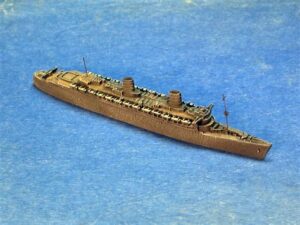 Canadian destroyer. The ship was recommissioned in June 1941 and renamed HMS Audacity in July,. The ship had its superstructure removed and replaced with a stem-to-stern, 475-foot flight deck.

Once in service, Audacity and its half-dozen Wildcat fighters (called Martlets in the Royal Navy) proved to be so effective at protecting Mediterranean convoys that Nazi U-boat chief Admiral Karl Dönitz felt compelled to pay rueful tribute to the “continuous air umbrella” the ship maintained. Shortly after ferrying survivors of the sunken fleet carrier HMS Ark Royal, Audacity was torpedoed by a U-boat on the night of December 19. The skipper, Commander D W McKendrick, and 75 officers and men died.