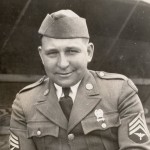 My dad, Aunt Laura, Uncle Bill, and Aunt Ruth had a half brother, of whom I was barely aware until recent years. I think I had heard about him, but somehow it really didn’t register in my mind, but rather seemed like someone who was somehow connected to someone else. While going through my dad’s pictures, we came across a picture of a man named Norman. We were pretty sure this was Dad’s half brother, and then when I was looking through my Uncle Bill’s family history books, our suspicions were confirmed. He looks like a very nice man, and I became very curious about him. I began researching him on Ancestry.com, and found that there was relatively little information, or at least that I could be sure of by documentation.  I knew that he was born on May 25, 1906 in Flambeau, Wisconsin, and that he passed away on October 26, 1977 in Richmond, Virginia. Since his birthday was coming up, I decided that I wanted to showcase him for his birthday…but, it was looking like it was going to be a very short story. I decided to ask some of the people on the Spencer Historical and Genealogical Society’s Facebook page to see if they could help. What an amazing idea that turned out to be. I quickly got a response from David Lawrence, and he had a wealth of information to give me.

He told me that Norman was married to a woman named Elizabeth, but it didn’t appear that they ever had children. He mentioned that he had been stationed in Oahu, Hawaii in World War II. Then he said that he had worked for the Virginia State Police as a radio technician in 1850. I had found Uncle Norman’s grave on FindaGrave.com a while back, and a reference to Elizabeth that I couldn’t confirm on Ancestry.com. This all gave me new motivation to find out more. I first went to FindaGrave.com and found Elizabeth’s grave, but all it said was Elizabeth H…no last name, and called her, simply his wife. I found that a bit odd, but then I started thinking about the Virginia State Police, and decided that maybe I could get more information by calling them. This also turned out to be an amazing idea. I was quickly connected to the Human Resource Records Department, and within just a few minutes they read me all of the information on my uncle’s employment card…and there was more that just his employments history. His parents names, which I already knew, were listed, but also Elizabeth’s last name, which was Hoover. They had his service years, August 25, 1925 to March 31, 1950, when he retired at the rank of captain. They also had, of course, his employment years, August 17, 1953 to June 1, 1971, when he retired at the age of 65. I couldn’t believe all this information had come my way, by simply reaching out to two key sources. It was an exciting day indeed.

I was curious as to what Uncle Norman might have done as a radio technician, so I did some research on that occupation and found that they design, set up, operate and maintain equipment and radios used for transmitting. This tells me that he probably worked on s 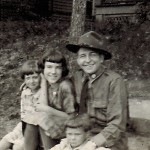 ystems for broadcasting information to and from the police officers of the Virginia State Police. I’m quite sure that the equipment he worked on back then would almost seem like a home built ham radio these days, compared to the equipment the police departments use today, and in todays world, his job might be a mix of those old radio technicians, and the work my cousin, Tim Fredrick, who is a half grand nephew of Uncle Norman’s, if I have my terminology right. I’ll bet he saw a lot of changes in that industry over his years of being involved in it. I wish I could have talked to him about it, but that was not to be. Today would have been my Uncle Norman’s 108th birthday. I’m really sorry I never got to know him, but happy birthday in Heaven Uncle Norman.