A Lack Of Stability 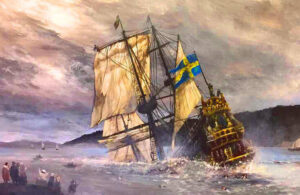 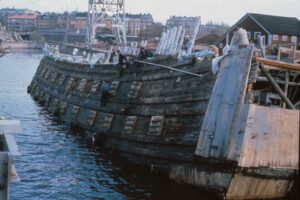 Vasa is a beautiful Swedish warship built between 1626 and 1628. For a warship, the ship was anything but plain. It was a very ornate, which is odd for a warship…at least as we see them today. The ship was built on the orders of the King of Sweden Gustavus Adolphus as part of the military expansion he initiated in a war with Poland-Lithuania, which took place between 1621–1629. Vasa was constructed at the navy yard in Stockholm under a contract with private entrepreneurs in 1626–1627. The ship was armed primarily with bronze cannon cast in Stockholm specifically for the ship. The king had her richly decorated as a symbol of his ambitions for Sweden and for himself. When she was done…she was not only stunningly beautiful, but she was also one of the most powerfully armed vessels in the world. All that was great, but Vasa was also dangerously unstable, with too much weight in the upper structure of the hull. That fact didn’t faze the king, who despite the lack of stability, of which he was informed, ordered Vasa to sea.

Vasa’s maiden voyage was an exciting moment for everyone in the area. On August 10, 1628, she set sail from the Stockholm navy yard and after encountering a wind that was barely stronger than a breeze, she sank after sailing roughly 1,400 yards. Seriously, that has to be the shortest maiden voyage on record…for all time. Vasa quickly fell into obscurity after most of her valuable bronze cannon were salvaged in the 17th century, which is odd, because they knew where she was and if they were able to pull the cannon up, why would they not take anything else. Nevertheless, she sat there until she was once again located in the late 1950s in a busy shipping area in Stockholm harbor. Amazingly, the ship was salvaged with a largely intact hull in 1961. She was temporarily housed in a museum called Wasavarvet (“The Vasa Shipyard”) until 1988, when she was moved permanently to the Vasa Museum in the Royal National City Park in Stockholm. Today, the ship is one of Sweden’s most popular tourist attractions. Since her recovery and placement in 1961, over 35 million visitors have seen the ship. Vasa has become a widely recognized symbol of the Swedish Empire…something I’m not sure I would like if I were the king, because while she is beautiful, she is unstable, and what leader would want “a lack of stability” to be part of their nation’s symbol.

It is said that the order to sail was the result of a combination of factors. The king, who was leading the army in Poland at the time of her maiden voyage, was impatient to see her take up her station as flagship of the reserve squadron at Älvsnabben in the Stockholm Archipelago, being the biggest one. Unfortunately, the king’s subordinates lacked the political courage to openly discuss the ship’s problems or to push to have the maiden voyage postponed. Of course, there was an inquiry by the Swedish Privy Council to find out who was responsible for the disaster. Nevertheless, in the end, no one was punished.

When the recovery crew went in to bring Vasa and her contents to the surface once again in 1961, they found thousands of artifacts, among them many items of clothing, weapons, cannon, tools, coins, cutlery, food, drink 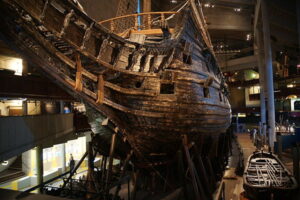 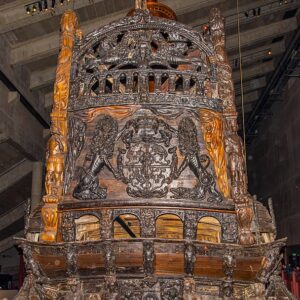 and six of the ten sails. Marine archaeologists also found the remains of at least 15 people in and around Vasa’s hull. The artifacts and the ship herself have provided scholars with invaluable insights into details of naval warfare, shipbuilding techniques, and everyday life in early 17th-century Sweden. Without question, Vasa is the world’s best preserved 17th century ship. The wreck of Vasa continually undergoes monitoring and further research on how to preserve her. 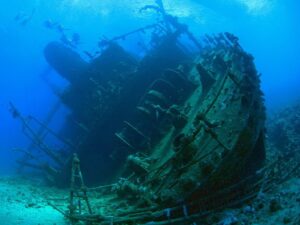 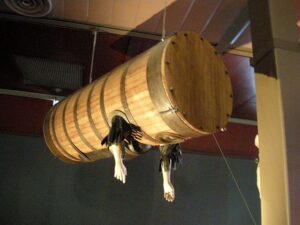