A Sizable Amount Of Money 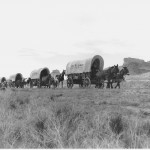 Lots of people would love to find a gold mine, stake a claim, and get rich. And if that didn’t work, they would love to stumble on a hidden or long lost treasure. Of course, for most of us that will never happen but that does not mean that those things don’t exist. In 1845, a group of pioneers were traveling by wagon train from Iowa to Oregon. They got as far as the Malheur River about a mile below the present-day Vale, Colorado. They had already traveled about 1,500 miles. They were tired and more than ready to reach their destination, they camped at a spring to rest for the night. The trip had been hard, and they had lost several oxen that had apparently died from poison. When one of the members of the party examined a carcass, his hand was infected and he too died. Tempers flaring within the group of travelers. It was time to bring their journey to a close. They were tough, but this was possibly more than they had bargained for.

Part way through their journey, the wagon train was joined by a man named Stephen Meek. He joined the party somewhere in present-day Montana or Idaho, claimed that he had been to Oregon and knew a shortcut. Along the trail, many of the men had begun to distrust Meek and when the party set out westward from the springs, they split into two groups. One group followed the known route, and the other group went on to Meek’s promised shortcut. The Meek party swung to the south toward the Steen Mountain country. As it turned 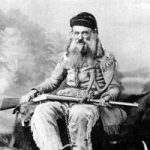 out, Meek didn’t really know where he was going and soon the group became angry at him, so he fled the wagon train in fear of his life, after only one week. The fighting among the members of the group caused them to split once again at the headwaters of Willow Creek. Part of the group headed towards Huntington and down the Columbia River, while the rest of the party continued to travel along the Malheur River.

Along the way, the party met with trouble again as one member was stricken with fever and died, and just a few miles later, several of the oxen were lost. Their journey seemed to be destined to fail. On August 25, 1845, three of the young men soon went out in search of the stock, walking all day and well into the late afternoon before coming to a small stream. After quenching their thirst, they picked up 15 to 20 pebbles in the creek that displayed an unusual color. Finally finding their oxen, they then returned to the train. They showed their stones to the older men in the train, and the “more seasoned” travelers said they were “copper.” When someone asked, “Was there much of it?”, one of the boys replied, “We could have filled one of these blue buckets.” One of the train’s members, Mrs Fisher, kept a single nugget and the train continued its journey, leaving behind the other stones.

Stephen Meek made it to The Dalles and returned to the train with a party of rescuers in order to save them. 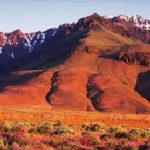 The wagon train finally reached its destination at The Dalles in October 1845. The people began the work of settling into their new home, and forgot about the stones until three years later when gold was discovered in California. Then someone mentioned the 15 to 20 “copper” stones found near the spring on their journey west. They re-examined the stone kept by Mrs Fisher, and soon discovered that it was actually gold. Thus began the search for the mythical or long lost Blue Bucket Mine. Though the location of the gold continues to remain a mystery to this day, it is believed to be at a tributary of the John Day River. I’m sure the people of the wagon train were sorry that they didn’t take the initial find more seriously. I have no idea how big the stones were, but I’m sure they left a sizable amount of money on the prairie that day.