Right Up His Alley 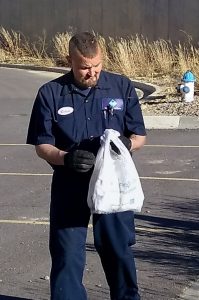 My nephew, Rob Masterson has been working at Sam’s Club in the Tire and Battery Center since August 1, 2017. Rob had not been able to work for some time, due to health issues brought on by his time in the service. The VA really wasn’t helpful to him, and after 4 plus years of waiting for them to decide on disability status, he’d had enough. Rob and his wife, Dustie were both unhappy with their current situation. Her job was not fulfilling, and they took her for granted. Then, Rob and Dustie basically stumbled on their jobs, and they will tell you that it was the best kind of accident to have. They were shopping at Sam’s club when they saw that Sam’s was hiring. They filled out the online application, and first Rob was called, and then Dustie. They were so excited to find that they would both be working at the same place. As Dustie puts it, “It’s amazing being able to work with your best friend. You know all the same people at work for the most part, and even though most people might find it weird to be able to discuss work and both know exactly what the other does, for us it’s just natural.” They did their orientation together, and both started on August 1, 2017. Rob actually started working before he completed the orientation, because his boss came in and said, “I need you now!” He would have to complete his orientation later. Rob, who has Rheumatoid Arthritis, was a little nervous about how his knees were going to handle the work, but he says that it hasn’t been too bad. Rob and Dustie prayed about his knees and ask for strength to be able to handle the work, and God answered their prayers.

He applied for one transfer within the store, but didn’t get it and Dustie says, “I’m glad. When the position opened up to be the team lead over Tire Battery Center, I knew it was a perfect one for him.” I think they didn’t give him the first position, because they knew he was a great asset to the Tire and Battery Center, and they didn’t want to lose him. In the short time that Rob has worked at Sam’s, he has proven his worth. Dustie says that Rob is so nervous about being a supervisor again, but what he doesn’t realize that he is doing a great job. The people that he works with and the people that work for him have nothing but respect for him, and vice 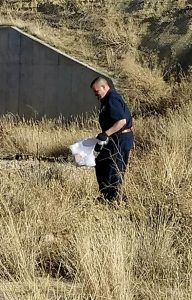 versa. He treats everyone equally and with respect. You can see that he is so much happier…though more tired now, but she doesn’t think he will give it up…ever. He takes pride in his work and it shows. From sweeping the floor and taking out the trash to making sure the tires are correct in size and mounted properly. I think that Rob has always loved tinkering on cars, and so this was right up his alley.

Rob even has his special clients…the ones who ask for him, and who don’t want anyone else to work on their vehicle. One of them is a cute older woman who will not allow anyone else to work on her car, but Rob. Apparently her husband just recently passed away and he was the one who took care of everything on the car for her. When Rob helped her with her car, she was so relieved that someone truly cared, that she teared up. Dustie says, “I couldn’t be more proud of my husband. He is such a wonderful man and he’s making a lasting impression on this Earth and in Heaven. I couldn’t agree more. Today is Rob’s birthday. Happy birthday Rob!! Have a great day!! We love you!!