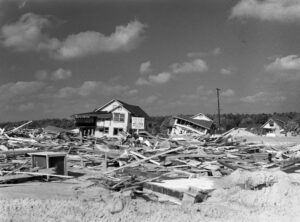 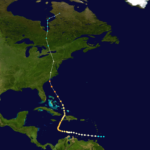 When I think of a hurricane, I think of a tropical storm that escalates, and I suppose most of the time, that would be right, but it isn’t always the case. Sometimes hurricanes can develop in a more northern area, or as in the case of Hurricane Hazel on October 15, 1954 a strong hurricane somehow continues north as a hurricane after it hit first in a more southern area. Hurricane Hazel was a hurricane that struck the Carolina’s, and then and then moved into Ontario as a powerful extratropical storm…still of hurricane intensity, after that initial strike in the Carolinas.

The deadliest hurricane of the 1954 Atlantic hurricane season, Hurricane Hazel was also the second costliest, and the most intense hurricane of that year. The storm killed at least 469 people in Haiti before striking the United States as a Category 4 hurricane near the border between North and South Carolina. As Hazel ripped through Haiti, it destroyed 40% of the coffee trees and 50% of the cacao crop, which would drastically affected the economy for several years.

After causing 95 fatalities in the US, Hazel struck Canada as an extratropical storm, raising the death toll by 81 people, mostly in Toronto. When Hazel made landfall near Calabash, North Carolina, it destroyed most waterfront homes. Then as it screamed north along the Atlantic coast, Hazel affected Virginia, Washington DC, West Virginia, Maryland, Delaware, New Jersey, Pennsylvania, and New York; as it lashed the area with gusts near 100 miles per hour and caused $281 million, which today would be $2720 million in damage. When it was over Pennsylvania, Hazel consolidated with a cold front and turned northwest towards Canada.

In addition to the fatalities, Hurricane Hazel brought with it flash flooding in Canada, which destroyed twenty bridges, killed 81 people, and left over 2,000 families homeless in Canada alone. In all, and including the strike in the Carolinas, where Hazel killed 95 people and caused almost $630 million ($6,100 million today) in damages, on top of over 500 other deaths and billions in damage in the US and Caribbean. No other recent natural disaster on Canadian soil has been so deadly. Floods killed 35 people on a single street in Toronto.

When it hit Ontario as an extratropical storm, rivers and streams in and around Toronto overflowed their banks, which caused severe flooding. As a result, many residential areas in the local floodplains, such as the Raymore Drive area, were subsequently converted to parkland. In Canada alone, over C$135 million (C$1.3 billion, 2021) of damage was incurred. The effects of Hazel were particularly unprecedented in Toronto due to a combination of heavy rainfall during the preceding weeks, a lack of experience in dealing with tropical storms,

and the storm’s unexpected retention of power despite traveling 680 miles over land. The storm stalled over the Toronto area, and although it was now extratropical, it remained as powerful as a category 1 hurricane. To help with the cleanup, 800 members of the military were called in and a Hurricane Relief Fund was quickly established that distributed $5.1 million ($49.1 million today) in aid. The name Hazel was retired as a named storm, because of the high death toll.