Church Of The Rock 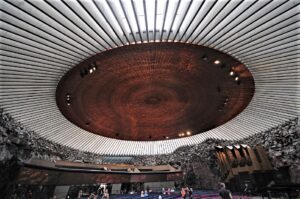 While there were those who thought it wasteful to build the lavish Temppeliaukio Church, a Lutheran church in the Toolo neighborhood of Helsinki, Finland. Before the construction of the church was even fully complete it made headlines when on the nights of July 16 and 17, 1968 a group of Christian students painted in large letters “BIAFRA” in several places on the exterior walls of the building to bring attention to the famine then going on in Biafra, which had declared independence from Nigeria in 1967. The students, part of the 1960s student revolutionary movement, thought they were doing a service to the people of Biafra, but they were simply young and naive, and they didn’t know that one thing had nothing to do with the other, because were the funds not used in the church, they would have been used for something else. Building the church or not building the church would make no difference for the people of Biafra.

The Temppeliaukio Church was designed by architects and brothers Timo and Tuomo Suomalainen and opened in 1969. It was uniquely built directly into solid rock. It is known as the “Church of the Rock” and “Rock Church.” Plans for the Temppeliaukio/Tempelplatsen (Temple square) began as early as the 1930s when a plot of land was selected for the building. It was decided to hold a competition for the design of the church. The plan by JS Siren, who was the winner of the second competition to design the architecture of the church, was interrupted in its early stages when World War II began in 1939. After the war, that design was scrapped and there was another architectural competition. That competition was won by Timo Suomalainen and Tuomo Suomalainen in 1961. Even that plan had to be somewhat changed when, for economic reasons, it was scaled 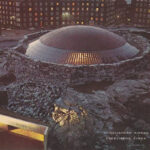 back, and the interior space of the church was reduced to about one-quarter of its original plan. I suppose that when you think about it, cutting a church into solid rock would be a complicated and costly operation. The long-awaited Construction finally began in February 1968, and the rock-temple was completed for consecration in September 1969.

As planned, the interior was carved out of solid rock. It is beautifully bathed in natural light which enters through the skylight surrounding the center copper dome. Strangely, the church reminds me of a spaceship, a little bit anyway, but I find it to be beautiful and quite peaceful too. The church is used frequently as a concert venue due to its excellent natural acoustics. The acoustic quality is created by the rough, virtually unworked rock surfaces. The iconic rock walls were not included in the original competition entry, even though the Suomalainen brothers had considered the idea, because they believed that it was too radical for the competition jury. I suppose thy wondered if it would be looked at as sacrilegious or maybe too backward to be beautiful… how very wrong they were about that. But when conductor Paavo Berglund shared his knowledge of acoustics from some of the best music halls and the acoustical engineer Mauri Parjo gave requirements for the wall surfaces, the Suomalainen brothers discovered that they could fulfill all the requirements for the acoustics by leaving the rock walls exposed in the Church Hall. It was also a financial savings both then and, in the future, as it eliminated the need to paint the interior.

Today, the Temppeliaukio church is one of the most popular tourist attractions in the city, with half a million people visiting it annually. The stone-hewn church is located in the heart of Helsinki, giving people easy access 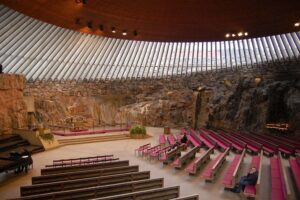 to its beauty and solace. Maintaining the original character of the square is the fundamental concept behind the building. The idiosyncratic choice of form has made it a favorite with professionals and aficionados of architecture. I can imagine that many of them come to see it simply to admire the perfection of this almost artistic masterpiece. The church furnishings were designed by the architects. Organ builder Veikko Virtanen manufactured the church organ, which has 43 stops and 3001 pipes. In an unusual anomaly, there are no bells at the church. Instead, a recording of bells composed by Taneli Kuusisto is played via loudspeakers on the exterior wall calls parishioners to the services.