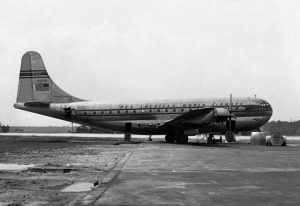 Pan American World Airways Flight 845/26, a Boeing 377 Stratocruiser, Clipper United States, N1032V departed from Seattle-Tacoma Airport (SeaTac) on March 26, 1955 at 8:15am…a Saturday morning, destined for Sydney, Australia, with stops at Portland, Oregon and Honolulu, Hawaii. Following its stop in Portland (PDX), the plane took off at 10:21am, with a crew of 8 and 15 passengers on board. It looked to be an easy flight to Hawaii, with plenty of onboard staff to make the trip enjoyable for the passengers. The plane was piloted by Captain Herman Joslyn, with First Officer Angus Gustavus Hendrick Jr; Second Officer Michael Kerwick; Flight Engineer Donald Read Fowler; and Assistant Flight Engineer Stuart Bachman. In the passenger cabin were Purser Natalie Parker, Stewardess Elizabeth Thompson, and Steward James Peppin.

The flight was proceeding as normal, until it hit 10,000 feet, at which point a severe vibration lasting 5 to 8 seconds began. The Number 3 engine, which is on the right side, on the inside, suddenly ripped away from the starboard wing. The damage to the wing caused severe shaking. At the same time, the nose pitched down and the airspeed increased rapidly. Captain Joslyn immediately reduced engine power slow the plane down some, but they were losing altitude rapidly, quickly dropping by 5,000 feet. The damage cause by the engine ripping away included damage to the engines’ electrical system, and the flight engineer was not able to increase power on the remaining three engines. Without the added power on the remaining engines, the Stratocruiser was too heavy at this early stage in the flight to maintain its altitude. She still had too much fuel onboard to compensate. The Stratocruiser was doomed, and there was nowhere to land.

The flight crew ditched the Stratocruiser into the north Pacific Ocean at 11:12am, approximately 35 miles west of the Oregon coastline. The conditions were ideal for ditching, with smooth seas and little wind, but it was a hard impact. As the plane hit the water, seats were torn loose, and several occupants were injured. Nevertheless, no one was killed and evacuation began immediately with the inflation of all three life rafts. The water temperature was 47° F, so getting out of the water was essential. Soon after the crash, a North American Aviation F-86F Sabre flown by Captain W L Parks, 142nd Fighter Interceptor Group, Oregon Air National Guard, located the scene of the ditching. When he saw the smoke flares that had been released, he was able to see the two life rafts tied together. A Lockheed Constellation also rushed to the scene from the south. After confirming that Air Force rescue aircraft were on the way, Captain Parks returned to Portland, because he was low on fuel.

Among the injured was the airliner’s purser, Natalie Parker, who had been assisting passengers with their life vests and seat belts when the airliner hit the water. Because she was standing in the aisle, she was thrown forward, knocking down five rows of seats as she hit them. She was badly bruised and suffering from shock. Nevertheless, Parker assisted the passengers in abandoning the sinking Stratocruiser. When everyone was off, she enter the water and saw that some of the injured had begun to drift away. In an amazing act of bravery and duty, and suffering from shock, Parker swam out and towed the only seriously injured passenger to the nearest raft, some 200 feet away. The Stratocruiser floated for an amazing 20 minutes before sinking. While all survived the impact, four of the 23 persons on board, passengers John Peterson, David Darrow, First Officer Hendrick, and Flight Engineer Fowler, died of injuries and exposure. The survivors were rescued after two hours by the crew of USS Bayfield (APA-33), a United States Navy attack transport. 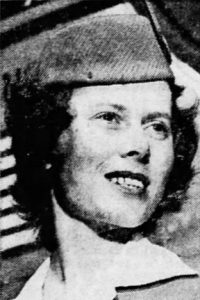 During the Civil Aeronautics Board hearings into the accident, Vice Chairman Joseph P. Adams commended Natalie Parker, the flight’s purser, “. . . all of us feel inspired that a fellow citizen, or just a fellow human being, can rise to such an occasion in the manner in which you did. It is most commendable, Miss Parker.” The exact cause of the loss of the Stratocruiser was not fully determined, because the engine and propeller were not recovered. Th investigation assumed that the most likely cause was a fracture of a propeller blade resulting in a severely unbalanced condition, causing the violent separation of the engine from the wing. This was the fifth time that a Boeing 377 Stratocruiser had lost an engine following the failure of a hollow-steel Hamilton Standard 2J17 propeller blade. Further complicating the matter, was the flight engineer’s attempt to increase the propeller rpm on the three engines simultaneously. That caused an electrical overload occurred which opened the master circuit breaker. This prevented any engine power increase, effectively bringing down the Stratocruiser.