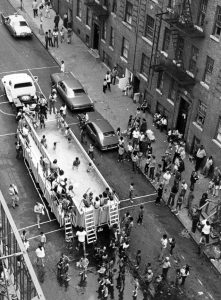 New York City can get hot in the summer. Maybe that is an understatement. I don’t think that New York City has more heat waves than other places, but because of so much asphalt, the heat is in the air, and then radiates back up from the streets again and again. Heat waves like this can not only make people sick, but they can kill people as well. Sometimes, desperate times bring desperate measures. Bathhouses, beaches, community pools, floating pools docked off the East River, all in an effort to cool off the overheated people. Nobody can say that New York City made no effort over the years to keep residents cool on hot summer days, but what of those who couldn’t get to the places set up too cool the the people off. Something had to be done. Enter the Swimmobile.

In the crisis, New York City decided to bring the pool to the people. These were the Swimmobile pools. They were attached to a truck, which could be parked on a street all day and conveniently towed away at night. “Swimmobiles began during the Heckscher administration [1960s-1970s] that literally took pools to the streets to underserved areas,” says the Parks Department website. It was more that trying to give more people the right to go swimming…this was life and death. A 1976 New York Times article stated that the city owned five mobile pools, which were towed from Randall’s Island to different corners of the city. These Swimmobiles Probably saved countless lives, and the people had fun too.

These past couple of days have brought temperatures in the high 90s and low 100s to Casper, Wyoming, where 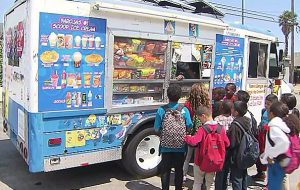 I live, and were it not for air conditioning, I would most likely be screaming for a Swimmobile myself, but I’m quite certain, none would be found. These were something that served its purpose in a time of need, and then went the way of most things when technology advances things…into the past. These days, when we are hit with a heatwave, people drive to the pools, lakes, or rivers…or they simply turn on the air conditioner, or if there happens to be an ice cream truck in the area, we can always indulge in some cold treats, as a way to cool off. Of course, if there is a power blackout, they would have to come up with another solution, as ice cream would not hold out long. Thankfully, outages don’t last too long, most of the time, or we might have to bring back the Swimmobile.