People Of The First Light 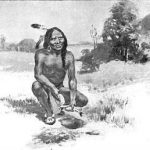 A man named Squanto, who was born about 1580 near Plymouth, Massachusetts, also known as Tisquantum, is best remembered for serving as an interpreter and guide for the Pilgrim settlers at Plymouth in the 1620s. The details about how Squanto got to Europe and back have been disputed by historians. He was a Patuxet Indian born in present-day Massachusetts, who is believed to have been captured as a young man along the Maine coast in 1605 by Captain George Weymouth, who had been commissioned by Plymouth Company owner Sir Ferdinando Gorges to explore the coast of Maine and Massachusetts, and reportedly captured Squanto, along with four Penobscots, because he thought his financial backers in Britain might want to see some Indians. Weymouth brought Squanto and the other Indians to England, where Squanto lived with Ferdinando Gorges, who taught him English and hired him to be an interpreter and guide. Now fluent in English, Squanto returned to his homeland in 1614 with English explorer John Smith, possibly acting as a guide, but was captured again by another British explorer, Thomas Hunt, and sold into slavery in Spain. Squanto escaped, lived with monks for a few years, and eventually returned to North America in 1619, only to find his entire Patuxet tribe dead from smallpox. He went to live with the nearby Wampanoags. Squanto’s life was truly not easy, but he still wanted to help others. Nevertheless, Squanto was the first person the Pilgrims met. He spoke to them in 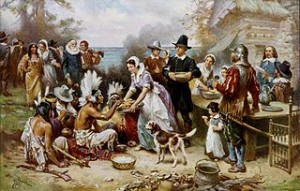 English and acted as an interpreter and guide to the Pilgrim settlers at Plymouth during their first winter in the New World. Squanto was born in about 1580 near Plymouth, Massachusetts.

Squanto’s assistance in connecting the Pilgrims with the Wampanoag Tribe was vital for the preservation of the Pilgrims. There were many reasons to be Thankful on that first Thanksgiving. They had survived the winter, and smallpox. They weren’t starving or dying of starvation. They had new friends, and they had learned new skills. It is believed that the first Thanksgiving is generally believed to have occurred between September 21 and November 9, 1621.